In its closing argument at the trial of former VRS Sarajevo-Romanija Corps commander, his defense again resorts to the strategy of total denial of the charges for artillery and sniping campaign against Sarajevo and its civilian population 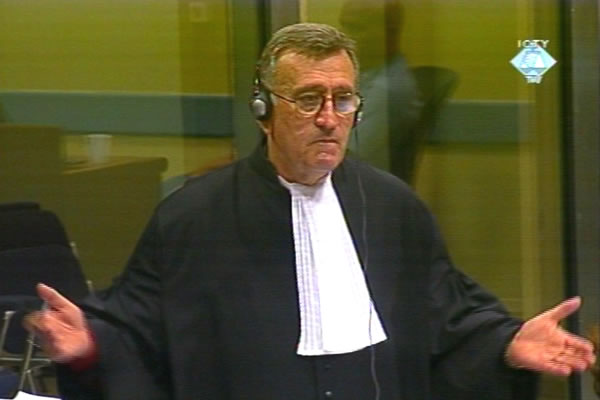 Branislav Tapuskovic, defense attorney for Dragomir Milosevic
In his closing argument, General Milosevic’s defense counsel Branislav Tapuskovic presented the same arguments he had been putting forward since the beginning of the trial. The former VRS Sarajevo-Romanija Corps commander is answering charges of artillery and sniper terror campaign in Sarajevo from August 1994 to the end of the war in Bosnia Herzegovina.

As he sees the evidence called at the trial, the defense has offered ‘irrefutable proof’ that Sarajevo was ‘not a civilian area’ but a scene of ‘fierce armed conflict’. ‘The civilians were not the only target,’ he said first, but then quickly corrected himself, saying that ‘they were not targets at all’. They were collateral casualties of combat operations, he contends. By the same token, Tapuskovic claims that ‘it has been proven that soldiers and civilians were intermingled in Sarajevo’ and that ‘every man and boy was armed’ in the city.

Tapuskovic went on to say that the defense has presented ‘irrefutable proof’ that the BH Army had taken all the dominant heights in the city and around it, positioning heavy artillery there. This made it possible to target their own civilians with mortar and sniper fire. Unlike the BH Army, in February 1994 the Sarajevo-Romanija Corps had to move its heavy weapons to at least 20 km from the town centre or to place the weapons in special storage points controlled by the UN. ‘Irrefutable proof’ has also been presented on the ‘huge supremacy of the BH Army in personnel and weapons’. At that same time, the VRS was under the embargo imposed both by the UN and the FRY; ‘not a single weapon or a single soldier’ crossed the Drina while the embargo was in place, Tapuskovic contends.

Tapuskovic was particularly categorical in his denial of any responsibility of the accused and the Sarajevo-Romanija Corps for the attack on the Markale market on 28 August 1995. Forty-three persons were killed and more than seventy were injured in the attack, the indictment alleges. He believes that ‘irrefutable evidence’ has been called to prove that the massacre was caused by a planted explosive device. According to his calculations, 25 to 30 persons could have been killed or injured’ in the explosion. All the other victims ‘died who knows where and were transferred there’ in order to stage a massacre of a massacre and blame it on the Serbs who would then be ‘punished’.

Not deviating from the strategy of total denial that the Sarajevo-Romanija Corps had committed any crimes, Tapuskovic ended his closing argument by saying he didn’t want to call for the acquittal of his client. He considered that this went without saying, as it was ‘irrefutably proven’ that the former Sarajevo-Romanija Corps commander was not guilty of the crimes he was charged. Yesterday, the prosecution called for life sentence.

As he declared the trial closed, Judge Robinson indicated the Trial Chamber would deliver the judgment ‘as soon as possible’.