At the appellate hearing in the case of former commander of the Sarajevo-Romanija Corps Dragomir Milosevic, sentenced to 33 years for artillery and sniper campaign in Sarajevo, the prosecution asked that this ‘patently inadequate’ sentence be changed to life in prison. The defense called for the acquittal of the accused or a much milder sentence 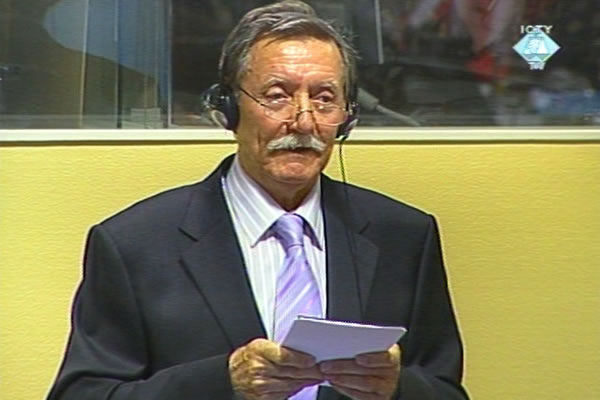 Dragomir Milošević u sudnici Tribunala
Former commander of the Sarajevo-Romanija Corps Dragomir Milosevic was found guilty in December 2007 of an artillery and sniper campaign targeting the civilian population of Sarajevo from 1994 to the end of 1995. Milosevic was sentenced to 33 years in prison and both the prosecution and the defense appealed the judgment. The prosecution asked for life in prison, arguing that 33 years is ‘a patently inadequate’ punishment. The defense urged for Milosevic’s acquittal or a milder sentence.

At the appellate hearing today, prosecutor Paul Rogers said that the 33-year sentence Milosevic received from the Trial Chamber didn’t reflect the graveness of the crimes. In comparison with his predecessor in the SRK Corps, Stanislav Galic, who was sentenced to life for the crimes in Sarajevo from 1992 to mid-1994, the terror campaign against Sarajevo civilians under Milosevic was ‘more subtle, precise and dangerous’. As the prosecution noted, the Trial Chamber erred when it took into consideration mitigating circumstances and imposed a ‘patently inadequate punishment’ given the scope of the crimes, their brutality and cruelty and Milosevic’s leading role: they all ‘merit a life sentence’.

Milosevic’s defense, on the other hand, contends that Sarajevo – due to a large number of the BH Army and MUP members – could not be treated as civilian zone; therefore, the SRK attacks could not be considered as attacks launched on the civilian population. Lawyer Branislav Tapuskovic estimated that somewhere between 45,000 and 50,000 members of the BH Army and about 12,000 members of the MUP were in the city: they ‘had the SRK surrounded’. Tapuskovic repeated a well-known defense argument that the hills around Sarajevo were held by the BH Army who terrorized the Serbs in Vogosca, Rajlovac, Ilidza and Grbavica. ‘In order to gain the sympathy of the world, the BH Army launched attacks against its own people’.

The defense contested the conclusion of the Trial Chamber that the Markale town market was shelled from the SRK positions on 28 August 1995. Thirty-four people were killed and 78 were wounded in the incident. The summary of the judgment quotes a Sarajevo police officer who did the crime scene investigation. In his words, what he saw at the Markale town market was ‘the last and the deepest circle of Dante’s Inferno’. The defense however contends that the Trial Chamber failed to take into consideration the fact that at the time of the incident Milosevic was undergoing medical treatment in Belgrade. Milosevic had eye surgery and according to Tapuskovic, the charges for the Markale town market should be ‘dropped’.

The accused Dragomir Milosevic addressed the judges of the Appeals Chamber, accusing the BH Army of continuously launching attacks all over the Sarajevo theatre while he and his Corps only defended themselves. In Milosevic’s words, they felt ‘worse than in hell’. Milosevic in the end said he was sorry for all victims, soldiers included; as he said, ‘they are human beings too’.