British war correspondent Martin Bell testified at the trial of General Milosevic. After his report on the Markale massacre on 28 August 1995 was shown in court, he admitted that to this day the fact that he couldn’t portray the real scale of the bloodshed made him unhappy. The reason why he couldn’t do that was the editorial policy of BBC: the reports were not to upset the public too much. Bell believes that BBC “should be ashamed because of that” 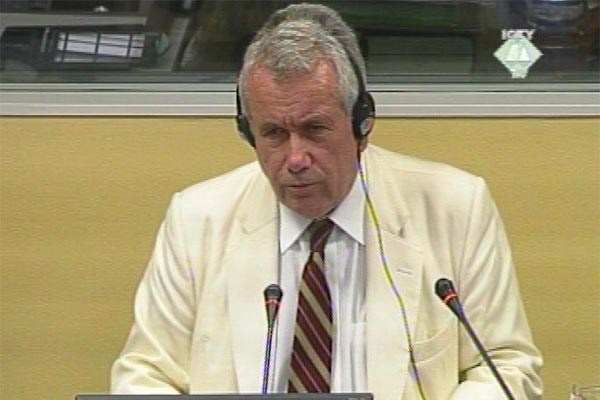 Martin Bell, witness in the Dragomir Milosevic trial
Martin Bell, one of the most famous members of Sarajevo war correspondent core, testified at the trial of General Dragomir Milosevic, former VRS Sarajevo-Romanija Corps commander charged with artillery and sniper terror campaign against Sarajevo between August 1994 and the end of the war in BH. “At that time there was no safe spot in the city”, Bell said.

Bell’s evidence is based on the reports from Sarajevo he had filed for BBC TV network. The prosecution showed about 20 clips from his war reports, covering all the elements in the indictment against General Milosevic: wanton shelling of the city and its symbolic buildings, sniper terror campaign against Sarajevo citizens - not even the UNPROFOR could protect themselves against the snipers, lack of food, water, gas and other necessities of life the citizens suffered because of the siege that went on for years and the blocking of humanitarian aid.

The British reporter confirmed the argument put forward by the prosecution that in the spring of 1995 the arsenal of the Sarajevo-Romanija Corps, operating under the accused Milosevic’s command, was extended to include new weapons: guided missiles, phosphorus bombs and modified air bombs. A clip from Bell’s report filed on 7 April 1995 showed the appalling destruction caused by the explosion of a modified air bomb in Hrasnica. According to Bell, these weapons could have been defined as “weapons of mass destruction”.

After his report on the Markale massacre (28 August 1995) was shown, Bell said, “To this day, I’m not happy with the fact that the real scale of the bloodshed could not be shown on TV”. Because of the BBC editorial policy, his report was not shown in order not to upset the public. In his opinion, BBC should be ashamed of that.

Prosecutor Carolyn Edgerton then went to show the shocking scenes of the Markale massacre that Bell used when he was editing the report, but could not use them because of the BBC editorial policy. Although the judges had previously intervened during the trial, disallowing the use of photos showing extreme images of shelling victims or sniper incidents, this time the judges watched the five-minute clip filmed immediately after the explosion without protest. Asked to give his comment, Bell said that this was “the most shocking war footage ever”. In his opinion, they should have been broadcast in order to “stop the slaughter, for the sake of humanity”.

In his cross-examination General Milosevic’s defense insisted on the old argument that the BH Army had shelled its citizens, referring to the report compiled by a Danish military observer. According to this report, the modified air bomb that hit the TV building was launched from the territory controlled by the BH Army. The defense also quoted General Nikolai’s evidence: he was told by General Van Bol that there “was at least one case when the BH Army troops opened fire on the territory it controlled”.

In his reply, Bell expressed his doubt about the accuracy of the Danish observer’s report, and his reservations towards “what one general said to the other general”. Such allegations, Bell said, were “so important that there should be some documented proof of them”.

General Milosevic’s defense currently doesn’t have such proof, but promised it would look for evidence to support its claims.