The defense counsel of the former Herceg Bosna leaders claim that the HVO did not have any motive to destroy the bridges in Mostar. The prosecution witness and the accused did not agree on the issue and at times their verbal skirmishes threatened to turn into a war of words. The judges tried to calm them down, reminding the parties that the times of war were long past 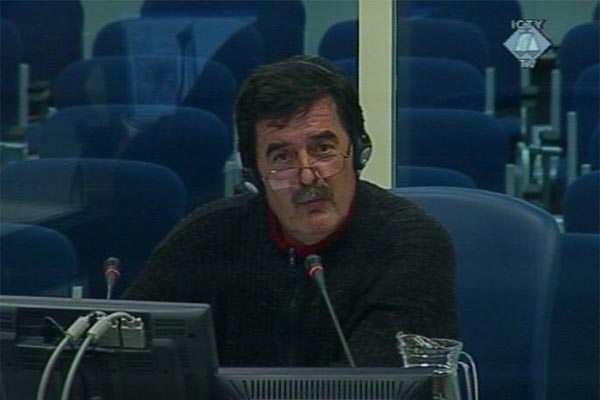 Miro Salcin, witness in the trial of the former Bosnian Croat leaders
The defense counsel of the six former Herceg Bosna leaders continued the cross-examination of Miro Salcin, former BH Army commander in Donja Mahala, a neighborhood in Mostar. Contesting the prosecution's claims about the destruction of the Old Bridge in Mostar, the lawyers maintained that the HVO "didn't have any motive to destroy the bridges". The accused Slobodan Praljak referred to his orders from 1992 in which he demanded that the Old Bridge be protected from the shelling by the JNA.

In response, the witness repeated that he had clearly seen who had destroyed the Old Bridge in 1993. In his view there is no doubt that an HVO tank did it. He added that the bridges over the Neretva had been destroyed deliberately. He mentioned the Bunur Bridge as a case in point. The HVO destroyed it, he claimed, to prevent a humanitarian aid convoy from entering that part of the city. The witness compared the destruction of bridges over the Neretva with "a tsunami" and said he had never seen anything like it in his life.

The confrontation of the former BH Army captain and the HVO general at the times threatened to turn into a war of words. Judge Antonetti had to caution both the witness and the accused more than once to try “to communicate calmly", adding that they were not in the courtroom "to continue the war".

The accused Slobodan Praljak quoted from a book entitled Herzegovinians at the Fiery Gate to Bosnia, by Esad Sejtancic. The book describes the BH Army efforts to move the front lines in Herzegovina. He quoted verses from a book dedicated to Sefer Halilovic, the first BH Army commander. Allegedly the verse "Sefer Pasha walks around Bosnia, cleaning the country of Ustashas" was sung around Mostar in those days.

The witness called the verse a fabrication and added, "we were all children of partisans after all".

Vesna Alaburic, defending the accused Milivoj Petkovic, used this opportunity to emphasize once again the issue of the alleged “treason” of Muslim soldiers in the HVO ranks. She showed the witness the wanted list issued by the District Military Court in Mostar, containing the names of 423 Muslim soldiers in the HVO ranks who had "deserted” on 30 June 1993 and joined the BH Army. The witness did not merely participate in the defense of Donja Mahala, she noted, but carried out sabotage actions aimed at capturing the territory.

Salcin denied the treason allegations, saying he did not know anything about that. He did go on to say that as a BH Army soldier he carried out sabotage actions against the HVO positions out of pure necessity, because it was a fight for survival.

As he left the courtroom at the end of his evidence, Salcin once again said to the accused that he did not care for their skin. The trial continued with the evidence of Nermin Malovic. He is a photographer whose photos of prisoners just released from Dretelj and Heliodrom camps traveled around the world in 1993.