On 8 November 1994, three shells landed in Livanjska Street in Sarajevo in just three hours. Six persons were injured; two died of shrapnel wounds. Lejla Hodzic was one of them. She was not more then 14 years old 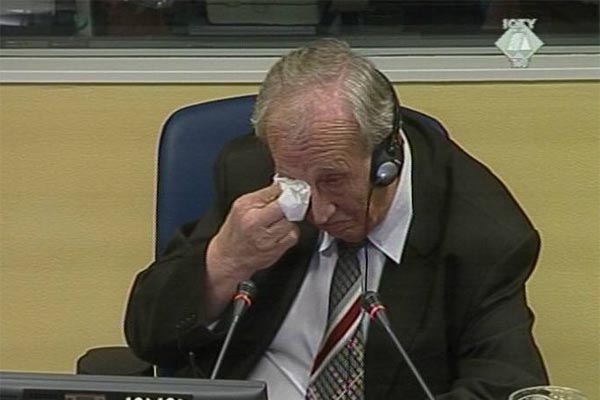 Fikret Mujezinovic, witness in the Dragomir Milosevic trial
Fikret Mujezinovic first heard the whistle of a shell and seconds later, the explosion. It was the first of three projectiles that fell on Livanjska Street in Sarajevo in just three hours on 8 November 1994. The incident is listed in the indictment against General Dragomir Milosevic, charged with the shelling of Sarajevo and a sniper campaign against the civilians.

In his deeply moving testimony, Mujezinovic described how he "lunged towards the place where the shell had hit". Some people who were closer to the place of the impact were already helping some of the injured. As it happened, Mujezinovic ended up "helping Lejla". Lejla Hodzic was a girl of not more than 14 years, according to witness’s testimony. After her mother died and her father got killed she came every day to the Red Cross kitchen for food. Mujezinovic knew her from there as he was working as a cook in the kitchen.

When he picked the girl up to put her into a car, he said he had felt "something warm on his fingers". “It was the girl's brain. She was killed on the spot", Mujezinovic said and burst into tears. Nevsija Deljanin was also killed in the attack on Livanjska Street. According to the witness, the shrapnel "tore everything in her body".

One person was killed and one injured by two other shells that fell on same day between 5,30 and 6 p.m. Mujezinovic claims that there were no BH Army military targets in Livanjska Street apart from a military kitchen of the BH Army. Military positions were deployed at least 2 km from the place where the shells hit.

Mujezinovic claims that the shells came from the direction of Orlovac, an area controlled by the Bosnian Serb Army. The defense counsel showed the witness a report made by the UNPROFOR French Battalion after an on-site investigation. The report states that the shell "most likely came from an area controlled by the BH Army". The prosecution stated that "at the moment" it would not be challenging the authenticity of this report, noting however that it actually referred to the shells that hit after 5 p.m., and not the first shell that hit Livanjska Street.

Azra Cisic took the stand after Fikret Mujezinovic. On 18 June 1995 she was injured as she queued for water at the water pump in the Simon Bolivar School in Dobrinja, a district of Sarajevo. In her words, the water pump was considered to be "the safest pump in Dobrinja" because it was located in the light shaft, in between the walls of the torn-down school. Seven persons were killed and twelve injured in that shelling incident. Azra Cisic was wounded in the heel and upper leg.