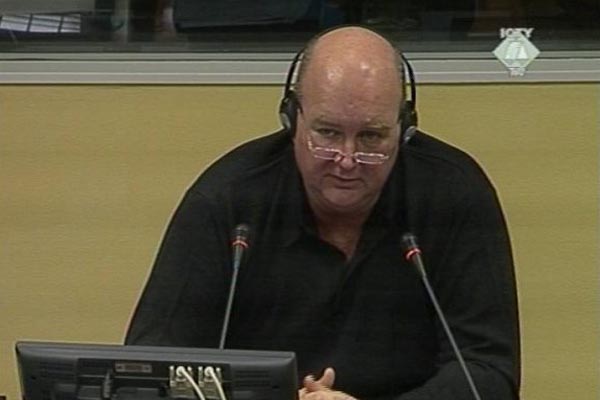 John Jordan, witness in the Dragomir Milosevic trial
Former US marine John Jordan explained how he and a group of colleagues from the GOFRS, a non-governmental organization, had come to Sarajevo in November 1992. Their “naïve” intention was to provide assistance to the local firefighters for a time. In the end, he remained in Sarajevo, with short breaks, until October 1995.

Jordan established the multi-national fire brigade that started operating as the Emergency Fire Service as part of the UN in mid-1995. He said that they had applied "the American and not European fire fighting practice", meaning that they "never said no". Not only did they put out fires, they offered emergency medical assistance to the local population, supplied food and water, took part in collecting dead bodies and in prisoner exchanges. Testifying at the trial of General Dragomir Milosevic, who is charged with sniper and shelling campaign against Sarajevo, he said that they had been helping both the Bosnian and Serbian side.

Four videos were played in the course of his testimony, showing him and his team putting out fires in Sarajevo, rescuing children from the rubble of a house destroyed by a shell and helping the family of a boy killed at a zebra crossing near the Sarajevo Museum.

The witness was not at the scene of the last incident shown on tape, but he remembered it had been a nice day. A nice day meant that "the snipers were active", he said. Before he was shot, the boy had asked a member of Jordan’s team who happened to be there for some candy. The next moment, the boy was dead and his mother wounded. The shot that killed him was fired from a building located in the area controlled by the Bosnian Serbs. Jordan himself was shot in the chest by a sniper in November 1994. The bullet was fired from the Serb positions, he says.

In his cross-examination, Dragomir Milosevic's defense counsel pointed to several "illegal acts" Jordan had done in Sarajevo. First, he came to Sarajevo without the approval of the Bosnian authorities. He carried a weapon with a scope and did not have a permit to do so. He took part in anti-sniper operations although it was a task of the UN French Battalion. Finally, he believed that he could arrest people without a warrant.

"It was our mission to protect people", Jordan said, adding that they “had to carry arms” at the scenes exposed to gunfire. He added that he had not arrested anybody in Sarajevo, but would have done so if he "had found the culprit that caused the fire". In his opinion, that would have been a case of “citizen’s arrest”.