According to General Dragomir Milosevic's defense, the explosion at the Markale town market in August 1995 was not caused by a mortar shell but by "a planted explosive device". Nobody was hurt in the explosion. The bodies shown on TV had been killed elsewhere and brought to Markale 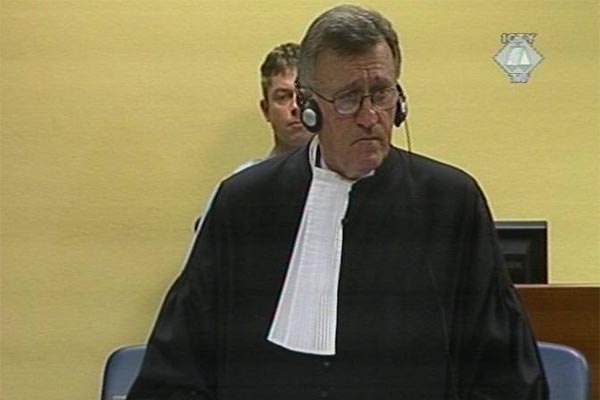 Branislav Tapuskovic, defense attorney for Dragomir Milosevic
General Dragomir Milosevic defense today presented two mutually exclusive theories on what had caused the explosion at the Markale town market. According to the indictment against the former VRS Sarajevo-Romanija Corps commander, 43 persons were killed and 75 injured in this incident that occurred on 28 August 1995.

In the examination-in chief yesterday, a protected prosecution witness who is a former member of the Bomb Squad in the BH Interior Ministry, said that the analysis of the crater had made him conclude that a 120 mm mortar shell had been fired from the south, from Trebevic. At the time, the Sarajevo-Romanija Corps artillery was deployed there. Branislav Tapuskovic, an attorney from Belgrade representing General Milosevic, said that the grenade could have been fired from Colina kapa hill, also on Trebevic, where the BH Army had its positions. The witness dismissed this claim, noting that the UN experts, having analyzed the crater, had reached the same conclusions regarding the angle of impact and the direction from which the shell had been fired.

The defense counsel then put forward a new theory. He claimed categorically that there had been no shell in the Markale 2 incident. The explosives were planted and activated by remote control. Stressing that he was saying that “with full responsibility", the defense counsel said that nobody had been killed by the explosives planted at the site. "The victims who had been killed in other places were later brought there" thus setting up the scene of the alleged massacre, the lawyer said.

When Judge Harhof asked him how he could prove his claims, Tapuskovic referred to "a large body of evidence already presented". However, he did not specify the statements or documents he had in mind. Tapuskovic also mentioned the fact that the UNPROFOR radars did not register the firing and the flight of this mortar shell. The defense counsel added that many other explosions listed among the incidents in the indictment had actually been caused the same way, by planting explosives at the sites. A case in point is the incident at the water pump hidden in the light shaft of a torn-down school in Dobrinja. Seven persons were killed and 12 persons injured. In another incident of that kind, two-year old Almedina Burek was killed in her apartment in No. 12, Geteova Street by shrapnel that went through the building wall.

The protected witness characterized these Tapuskovic's claims as "the darkest banalities I’ve ever heard”, adding that such claims "killed the victims for the third time". The victims were first killed physically, then for the second time when they were mocked on Pale TV, and now when they were denied their very existence. He says that people in Bosnia say that "every shell that did not hurt or kill anyone was fired by Serbs and all the shells that killed civilians were fired by the Bosniak side”.

Interestingly enough, General Stanislav Galic had opted for total denial as his defense strategy. He was General Milosevic's predecessor at the post of the Sarajevo-Romanija Corps commander. He too was charged with the artillery and sniper terror campaign in Sarajevo from September 1992 to August 1994. This defense was no good: the Appeals Chamber sentenced him to life in prison.