VITAL PARTS OF THE HOSPITAL UNDER ATTACK

Dr. Bakir Nakas thinks that the State Hospital in Sarajevo was shelled "on purpose, with the intention to destroy its vital parts". It was a military hospital, so the attackers were acquainted with its layout. At the trial of general Dragomir Milosevic, the court heard the evidence of two sniper victims, wounded in November 1994 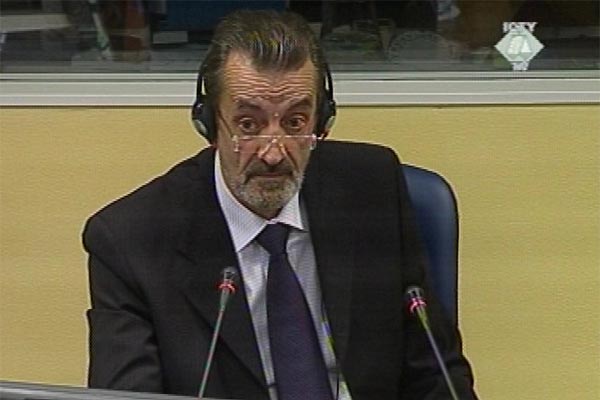 Dr. Bakir Nakas, witness in the Dragomir Milosevic trial
Between August 1994 and November 1995, the period relevant for the indictment against general Dragomir Milosevic, 115 patients wounded in sniper incidents were treated in the State Hospital in Sarajevo. Of that number, 74 were civilians and 8 of them were children.

The prosecution tendered into evidence a table containing these data through witness Bakir Nakas, medical doctor and general manager of the former State Hospital, now renamed General Hospital. The witness explained that those data didn’t include sniper victims treated in other hospitals and pointed to the fact that that the State Hospital accounted for about 10 percent of the overall medical capacity in Sarajevo in the siege years.

On 13 May 1993, when a tank scored a direct hit on the hospital for the first time, the personnel displayed a big Red Cross flag on its southern side hoping it would deter further shelling. The flag was soon torn to pieces by bullets and shrapnel hitting the hospital. Doctor Nakas thinks the aim was to "destroy vital parts of the hospital" that used to be a JNA military hospital. The attackers were well aware of the hospital's layout and knew where to aim in order to inflict greatest damage. They targeted in particular the eighth floor with the columns vital for the stability of the building. The upper four floors were in serious danger of caving; they would take with them the rest of the hospital.

In his cross-examination general Milosevic's defense counsel reminded the witness that on the eve of the war and at its very beginning a commando unit from Nis had been stationed in the hospital. If they had wanted to do so, they could have easily destroyed the hospital. The witness disagreed. In his opinion, at the very beginning of war it was decided that the demarcation line would run along the Djure Djakovica Street. The hospital would thus remain in the territory controlled first by JNA, and later on by the Bosnian Serb army. With the failure of the “Pofalic battle” launched by the JNA in early May to divide the city in two, the hospital remained in the territory under the control of Sarajevo’s defenders. According to doctor Nakas, "the Nis commando unit had neither time nor the opportunity to do anything", so they quickly left the hospital.

Two sniper victims took the stand today at the trial of general Milosevic, after Doctor Nakas completed his evidence. Sanela Dedovic was wounded in the leg in November 1994 on a crossroads in Sedrenik. She was twelve years old at the time. Hafiza Karacic was hit by a sniper in a tram in front of the Holiday Inn Hotel. Five more persons were wounded and one was killed in the same incident on 23 November 1994.

Sanela Dedovic described in her evidence how the sniper bullet came from the direction of Spicasta stijena. In her cross-examination, the defense counsel pointed to the fact that the BH Army had had positions between Spicasta stijena and the Sedrenik crossroads, implying that the girl could have been wounded in the crossfire between two warring sides. The defense counsel of the former Sarajevo-Romanija Corps commander will cross-examine Hafiza Karacic tomorrow.