Dragomir Milosevic's defense counsel accuses a protected prosecution witness today that he had set up the firing of the projectile that had hit the Sarajevo TV building in June 1995, adding that he had done that either alone or together with other members of the investigation team at the explosion site. In the re-examination, the prosecution produced a document in which General Mladic congratulates the Serb artillery their accurate targeting of “the center of the media fabricating lies against the just struggle of Serb people" 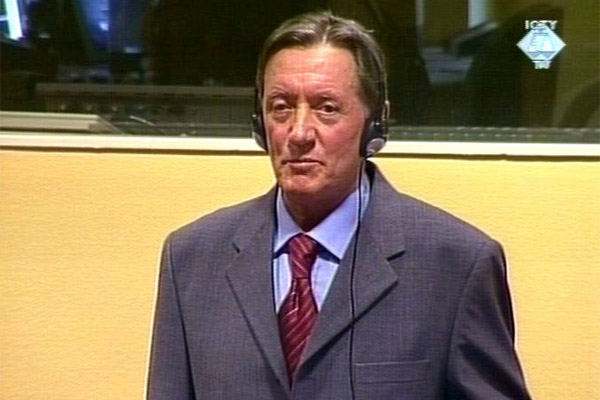 Dragomir Milosevic in the courtroom
Belgrade attorney Branislav Tapuskovic, representing General Dragomir Milosevic, today accused a protected prosecution witness that he had fired the modified air bomb that had hit the Sarajevo TV building on 28 June 1995, killing one and injuring 28 persons. According to Tapuskovic, he had done that either alone or together with some other colleagues. The protected witness was a crime scene technician who did the on-site investigations of shell explosions and sniper incidents during the war. He has been testifying about that for the past few days at the trial of the former VRS Sarajevo-Romania Corps commander.

This led General Milosevic's defense counsel to conclude that the witness and the crime scene team doing the on-site investigation in the TV building actually "fired the rocket and set things up to show the world yet another horrible crime committed by the Serbs”. And then, Tapuskovic claimed, they did something even worse: they brought the dead body of their colleague and put it in the atrium of the TV building, posing it as a victim of the alleged attack from the Serb sire. Their colleague was a police officer killed somewhere else. Tapuskovic accused the protected witness that he “committed a war crime by organizing the launching of the missile and set up the crime scene, misleading the court and obstructing justice”. If he, Tapuskovic said, were in charge, “the witness would never walk away free from the courtroom”.

The witness calmly dismissed all Tapuskovic's claims and accusations. The presiding judge overruled the prosecution's objection to the manner of questioning saying the defense counsel had the right to present his arguments. If there is no evidence to corroborate them, they will be not given any weight anyway.

Evidence, albeit of a different kind, was presented by prosecutor Manoj Sachdeva, in a short re-examination. He presented a document originating from the Sarajevo-Romanija Corps dated 30 June 1995. Major General Dragomir Milosevic, the Corps commander, relays to his troops General Ratko Mladic’s congratulations to them on "the unprecedented heroism" of the Serb soldiers. Special praise is reserved for the Serb artillery who "responded with accuracy to the Muslim attacks". Mladic goes on to say that, in one such response, “our artillery hit the BH TV center, the center of the media fabricating lies against the just struggle of Serb people".

This document was admitted into evidence despite the defense counsel's opposition, based on the fact that it didn't carry General Milosevic's signature.