In the cross-examination of former UNPROFOR Chief of Staff in BH, the defense counsel of General Dragomir Milosevic put it to the witness that the Markale 2 massacre on 28 August 1995 had been caused by planted explosive devices. General Nikolai says that “a thorough investigation” had determined that the shells had been fired from Serb positions “with 99 percent reliability”. The prosecution witness “clarifies” some of the claims he made yesterday which seemed to confirm the defense arguments 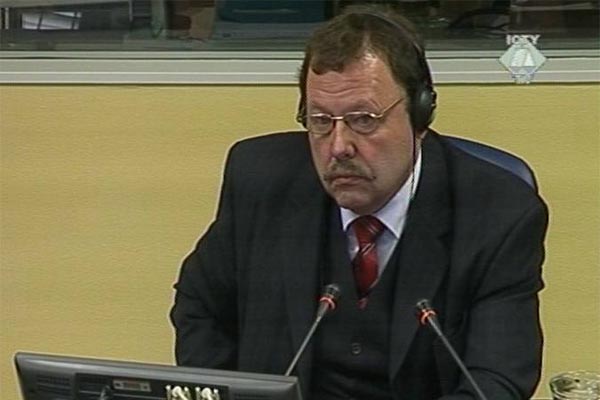 Kornelis Hendrik Nikolai, witness in the Dragomir Milosevic trial
On the second day of the cross-examination of Dutch general Nikolai, who had served as chief of staff in UNPROFOR in BH, the defense counsel tried to refute the responsibility of the Serb side for the Markale 2 incident. Forty-three persons were killed and about eighty wounded in the attack on 28 August 1995.
UNPROFOR’s conclusion that the Serb side was responsible for the incident was the immediate cause for the air strike campaign against the VRS positions in the beginning of September 1995.

General Nikolai confirmed his statement given to the OTP investigators in 1996 that the British and Dutch radars used by UNPROFOR at that time had not recorded the trajectory of any of the five shells that landed around the Sarajevo Market, located in the city centre. He added that the sound recording devices had not registered the characteristic sound of mortar shells being fired and flying over an area. The witness admitted that this was odd, adding that it was possible that the radars and the sound devices did not actually “cover the whole Sarajevo area” or that they were not “positioned properly”.

The Dutch general does claim that UNPROFOR treated the incident "very seriously", conducting "a thorough investigation" of the impact sites. The shell crater analysis showed with 99 percent reliability that the shells had been fired from the southeast, the positions of the Serb forces some 3.5 to 4.5 km from the Sarajevo city center. According to his testimony, the NATO air strikes against the VRS positions were called in only after that.

General Dragomir Milosevic’s defense counsel denies all this, putting to the witness that those had not been mortar shells but planted explosive devices. After Srebrenica and Zepa were captured, "such a thing was not necessary" for the Bosnian Serb army. On the other hand, the BH Army "had a lot of reasons to provoke a NATO intervention, one of which was to cause the collapse and capitulation of the VRS".

In the re-examination, the prosecutor asked General Nikolai to clarify some of his yesterday's statements which seemed to confirm some of the defense arguments. Today the witness said he had heard General Van Bal, his predecessor, saying that the Muslims "shelled their own people" in reference to his doubts about just one incident in the first half of 1994. The general also said that his statement about the "armed men and boys" referred to the difficulties the authorities had in controlling the snipers because "many civilians were armed". However, he stuck to the statement he made yesterday about the "BH Army provocations", saying in his re-examination that the Serb forces "returned fire either targeting the same position, or sometimes firing on the city at random". According to General Nikolai, targeting civilians “cannot be a proportionate response to attacks” by the other side in hope of making the other side cease their fire.