Dutch general Nikolai, former UNPROFOR Chief of Staff in Sarajevo testifies about the protest letters he sent to the accused Dragomir Milosevic and his superior Ratko Mladic in 1995. The protests concerned the shelling of Sarajevo and sniper attacks on civilians. In the cross-examination, the witness confirms the defense argument that the Bosniaks “shelled their own people”, “provoked Serb snipers” and that “all men and boys in Sarajevo had arms” 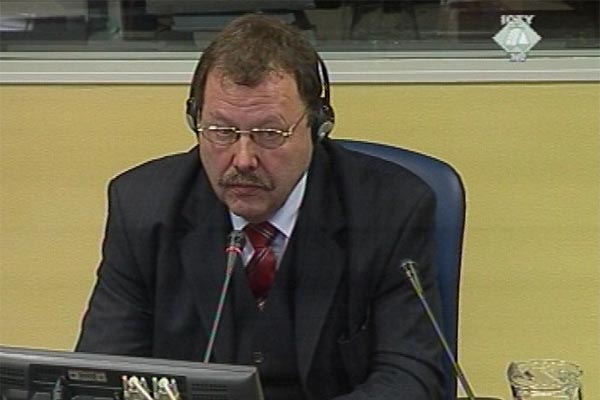 Kornelis Hendrik Nikolai, witness in the Dragomir Milosevic trial
Dutch general Cornelis Nikolai was the UNPROFOR Chief of Staff in Sarajevo. Between February and September 1995, he signed more than 50 letters of protest, addressed to the commanders of the Republika Srpska Army. In them, he protested against the violations of the Cessation of Hostilities Agreement and the artillery and sniper attacks on the city.

A bundle of those letters was admitted into evidence today at the trial of General Dragomir Milosevic, former commander of the VRS Sarajevo-Romanija Corps. General Milosevic is charged with the shelling of Sarajevo and sniper campaign against civilians from August 1994 and November 1995. Some of those letters are addressed to the accused Milosevic himself, some to his superiors, generals Ratko Mladic and Manojlo Milovanovic. In the letters sent to Mladic and Milosevic on 30 July 1995, the two generals are warned that artillery attacks against the civilian population in the previous two days constituted a breach of the Geneva Conventions that might lead to them being indicted by the International Criminal Tribunal for the former Yugoslavia.

Typical responses to those protest letters, General Nikolai explained in his testimony today, were either denials that the shells or sniper bullets had been fired from VRS positions, or claims that the attacks were a response to a provocation by the other side. “Sometimes there really were provocations: fire was opened from infantry weapons or mortars on the Serb positions,” General Nikolai said, adding that the Serb side would then respond by opening fire “on various targets in the city, including civilian ones”.

Writing protest letters was one of the options UNPROFOR had to respond to the violations of the Agreement on the Heavy Weapons Exclusion Zone around Sarajevo. Another option at their disposal was to call in the air strikes against Bosnian Serb positions. General Nikolai today spoke about the strikes targeting the ammunition depot at Pale on 25 May 1995. Retaliatory attacks followed on the protected areas in Bihac, Gorazde and particularly on Tuzla, where more than 80 people were killed when the town centre was shelled. It is interesting to note that the UNPROFOR Chief of Staff was unable to remember yet another Mladic’s response to the attack on Pale: the taking of some 400 UN personnel as hostages and their use as “human shields” in VRS facilities that were potential targets for air strikes. The general could not recall this despite the prosecutor’s repeated efforts to elicit the answer.

In the first part of the cross-examination, General Nikolai confirmed a number of key arguments for General Milosevic’s defense. He confirmed the statement he had made in 1996 that the Bosniaks “shelled their own people”. He also said that they had fired mortars at Serb positions from the BH Army HQ near the Ice Hall, adding that when the Serbs returned fire they “could not avoid hitting the nearby hospital”. He also said that the authorities in fact “provoked the Serb snipers” when they set up a water supply point at the Trg Heroja Square, very near the front line. He confirmed another statement he had made in 1996, that in Sarajevo “every man and boy had a weapon”. The defense counsel insisted on “armed boys”, probably because the sniper incidents alleged in the indictment against General Milosevic include those in which boys aged 14 and 16 and a 12-year-old girl were killed or wounded.