Dzenana Sokolovic testifies today ay the trial of General Dragomir Milosevic. She described how she was hit by a sniper in the Sarajevo city center in November 1994. The bullet that passed through her stomach hit her seven-year old son Nermin in the head. The defense counsel claims the victim doesn’t know where the fatal bullet was fired from 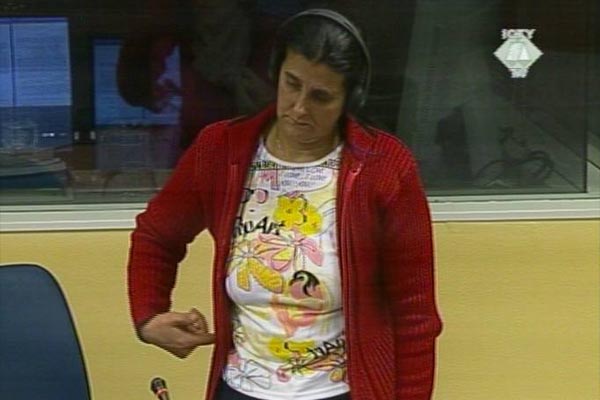 Dzenana Sokolovic, witness in the Dragomir Milosevic trial
On 18 November 1993, Dzenana Sokolovic was walking down the street with her seven-year old son Nermin holding her coat when she was hit by a fatal sniper shot. The bullet hit her in the stomach, passed through and then hit her son’s head. At first the witness did not realize she was wounded. When she saw her son Nermin fall, she thought he simply went down to take cover. She herself had instructed him to do so if he heard gunfire in the streets. She lost consciousness and when she woke up in hospital she was told Nermin had been "wounded just a little" only to find out five or six days later her son was dead and buried.

Dzenana Sokolovic is the first victim of the sniper attacks against the Sarajevo civilians to testify at the trial of General Dragomir Milosevic, former VRS Sarajevo-Romanija Corps commander. The OTP investigators carried out a reconstruction at the crime scene in the Zmaja od Bosne street, close to the Holiday Inn Hotel. According to them, the bullet that wounded Dzenana Sokolovic and killed her son was fired most probably from the Metalka building in Grbavica, a part of Sarajevo notorious as a sniper nest of the Serb forces.

Today the witness was not able to pinpoint the exact location of the Metalka building on the aerial photo of Sarajevo saying, "I rarely go to Grbavica" or any other part of Sarajevo outside of Bistrik where she lives. General Milosevic’s defense counsel tried to use this to prove the witness did not know where the shot was fired from, implying that she had heard of the Metalka building from the police investigators who had visited her in the hospital. Dzenana Sokolovic confirmed that the police officers had showed her the Metalka building as the place where the shot had been fired. She added that there were other patients in the hospital who had been wounded by snipers shooting from that building.

Dzenana Sokolovic still has physical and mental consequences both of her wounding and the loss of her son. She is feeling, as she said, "very, very poorly". In the course of her evidence today, she was often confused, unable to distinguish clearly right from left. The defense counsel tried to exploit this to question the direction from which the shot was fired. In the re-examination, the prosecutor first read the medical report stating "the entry wound is on the right-hand side and the exit wound on the left-hand side of the abdomen" and then asked the witness to stand up and show where the bullet had entered and where it had exited her body and where her son Nermin had been walking. The defense counsel objected to such a leading question, asking leave to ask some additional questions. The Chamber rejected the request.

After Dzenana Sokolovic, the prosecution called a protected witness testifying under protective measures. She is a victim of a sniper attack on the Sarajevo trams. She began her evidence in closed session.