A UN monitor from Norway confirms the terror campaign in Sarajevo was “enhanced” with the use of modified air bombs after General Dragomir Milosevic took over command of Sarajevo-Romanija Corps command. This confirms the prosecution’s allegations 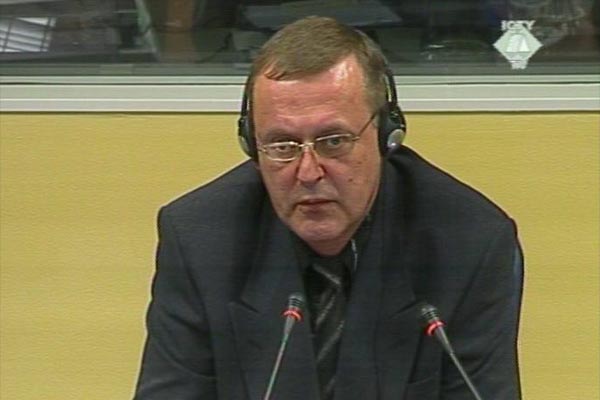 Thorbjorn Overgard, witness in the Dragomir Milosevic trial
According to the prosecution, after General Dragomir Milosevic took over the command of Sarajevo-Romanija Corps from Stanislav Galic in August 1994, he continued the shelling campaign against civil targets throughout the city "elaborating and enhancing it" by the use of modified air bombs. Norwegian major Thorbjorn Overgard bore witness to the impact of this highly destructive indiscriminate weapon. Overgard was a member of the UN monitoring mission located in Sarajevo's Hrasnica district throughout the period relevant for the indictment against General Milosevic.

The witness described the incident of 7 April 1995 when a modified air bomb hit civilian houses near the UN monitoring mission headquarters. The bomb razed a house to the ground, and caused damage to the houses in a radius of several hundred meters. The Norwegian major remembers having seen in "one or two legs sticking out of the ruins" and is sure the attack cannot be qualified as a miss, or collateral damage, since the nearest BH Army military facility in Hrasnica was located one kilometer from the impact site. Overgard, an experienced air force officer, claims it is absolutely impossible to control and guide air bombs especially if they are fired from "an alternative source", as this was the case, from a truck, and if they are fitted with six auxiliary rockets called "motor bombs".

Interestingly enough, in the opening statement the prosecution presented General Milosevic's order issued on 6 April 1995 according to which the Ilidza Infantry Brigade had to prepare an aircraft bomb launcher for immediate use and to select the "most profitable target in Hrasnica" that would cause the "greatest death toll and physical damage". More details on this order which was apparently executed the next day will be presented in the further course of the prosecution case.

During his stay in Sarajevo, the Norwegian major and his UN colleagues carried out a number of on-site investigations following sniper and artillery attacks on civilians. In the first months, he says, such attacks occurred every day; later they become less frequent – although they still occurred "very, very often".

According to his evidence, it was easy to determine the positions from which the civilians were attacked. When the casualties were caused by sniper fire, he and his UN colleagues looked at the position of the bodies and tried to determine the origin of fire, the entry and exit wound. In shelling incidents, the position of the artillery piece was determined by the position of the missile fins, the crater and shrapnel dispersion. The Norwegian major stated unequivocally that all sniper and artillery attacks against the civilians in Hrasnica were carried out from Bosnian Serb positions on the Igman. He gave an example of a 17 year-old girl killed by sniper fired from the VRS positions.