Milan Martic’s responsibility for the crimes in Krajina and the rocket attack on Zagreb has been proven beyond reasonable doubt, the prosecutor believes. In light of the gravity of the crimes and other aggravating circumstances, the most severe penalty is called for. The prosecutor goes on to say that the accused in a way took part in proving his guilt, with his public statement between 1990 and 1995 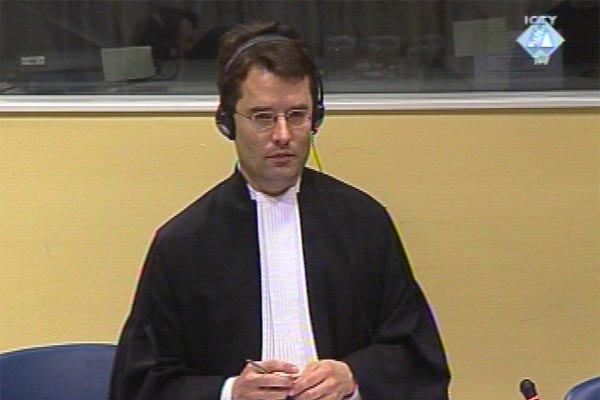 Alex Whiting, heading the prosecution team in the Milan Martic trial
In the closing argument at the trial of the former Krajina Serb leader Milan Martic, the prosecution calls for the life sentence for the accused, because, in its view, his responsibility for the crimes in Krajina and the rocket attack on Zagreb in May 1995 has been proven beyond reasonable doubt. To support the demand for life in prison for Martic, Alex Whiting, lead counsel for the prosecution, listed a number of aggravating circumstances: gravity of the crimes, discriminatory intent, severe suffering of the victims, the temporal and territorial scope of the crimes, eager and zealous participation of the accused, and finally, lack of remorse and attempts to justify or deny the crimes.

The prosecutor contends that enough evidence has been presented to confirm Martic's key role in the joint criminal enterprise aimed at creating a greater Serbian state. The SAO Krajina was to be part of it, once it was cleansed of Croats and other non-Serbs. The crimes in Krajina were not committed spontaneously or randomly, but in a planned and organized manner by the Krajina leadership, acting in concert with the Belgrade authorities and the JNA, the prosecution went on to say.

According to the prosecution, Milan Martic was the key figure in the government in Knin and the man who controlled the military forces responsible for the crimes throughout the war. This was the case when he was the police minister and continued later when he became the president of the state. He was the top man in the leadership that first instilled fear of Croats into the Krajina Serbs, the prosecutor says, and then turned the fear into hatred. This resulted in a number of crimes. To corroborate his claim, the prosecutor cited one of Martic’s defense witnesses. “It is not a crime to do evil to the evil people,” he wrote during the war.

Apart from a number of documents and witness testimony, the prosecution claims are corroborated by many public statements made by the accused in the nineties. He reminded the court of Martic’s statement from August 1990. He said that his police would defend “only the Serb people and will oppose the Croatian authorities”, his frequent statements about cooperation with the Belgrade authorities and the JNA and his public admission that he personally ordered the rocket attack on Zagreb in May 1995. Seven civilians died and about 200 were wounded in the attack.

In his overview of the crimes Martic is charged with, the prosecutor noted the murder and expulsion of civilians from Kijevo, Saborsko, Poljanak, Dubica, Bacin, Lipovaca, Skabrnja, Nadin, Bruska and other Croatian villages and the torture of civilians in a number of detention facilities in Knin. In his view, eyewitness testimony proved that members of Martic’s police or other armed forces under the control of the accused had been responsible for the crimes in all those locations.

At the end of the session today, the defense began its closing argument. Martic’s defense counsel Predrag Milovancevic claims that “no allegations in the indictment has been proven”, and that the indictment is based “on fiction and fabrications”. Although in his final brief the prosecutor stressed that this case was not about who was responsible for the break-up of Yugoslavia and the war, the defense considers the issue to be important and insists on the claim that Croatia organized “armed rebellion against a sovereign European state, Yugoslavia”. The defense will have an opportunity tomorrow to present its arguments related to specific crimes alleged in the indictment.