Milan Martic’s defense intends to call 54 witnesses and 2 experts. The first witness will be Slobodan Jarcevic, Krajina foreign minister, and the last will be the accused himself. The Chamber learned the identity of 47 witnesses only today, because, as the defense counsel claims “the Croatian authorities have issued arrest warrants against those persons” 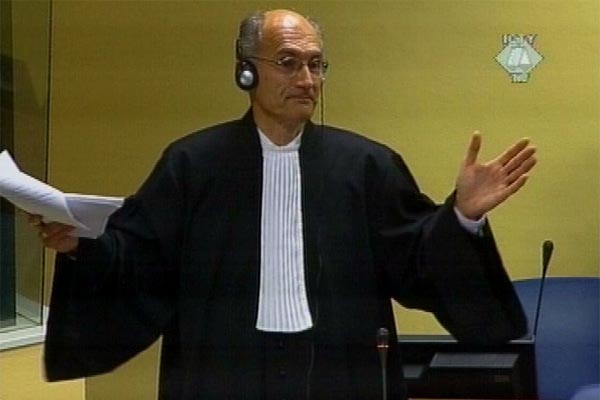 Defense attorney for Milan Martic
Milan Martic will testify as the last defense witness, his defense counsel Predrag Milovancevic at the pre-defense conference today. The first witness will be the foreign minister of the former RSK and erstwhile Martic’s advisor Slobodan Jarcevic. In February this year he testified at the trial of Slobodan Milosevic, also as a defense witness.

Martic’s defense announced it intends to call a total of 54 witnesses and two experts. The identity of 47 persons had not been disclosed either to the prosecution or to the Chamber because, as his defense counsel explained today, “the Croatian authorities have issued arrest warrants” against those persons, or “have already convicted them in absentia”. The defense counsel believes that the witnesses’ concerns are justified, particularly in light of “media reports on the penetration of the ICTY by the Croatian intelligence services”.

When the prosecutor insisted on the disclosure of the witnesses’ names, the Chamber ordered the defense counsel to submit the list of Martic’s defense witnesses within 15 minutes of the end of the hearing, and to “provide clear evidence of the involvement of the Croatian security services in the work of the International Criminal Tribunal for the former Yugoslavia”.

The defense was also ordered to supplement the summaries for the testimony of the first few witnesses, and to submit a more detailed list of facts the other witnesses would be testifying about, including the accused Martic himself, in order for the prosecution to be able to prepare for the cross-examination.

The defense has asked for 320 hours – 80 trial days – for the examination of its witnesses. If the Chamber, with Judge Moloto presiding, allows that, the defense case would be two weeks longer than the prosecution case. The Chamber will rule on this issue on 14 August, after the summer recess at the ICTY, after examining the full list of witnesses and facts they will be testifying about.

The defense will present its opening statement on Tuesday, 11 July. The first witness will appear the next day. Martic is charged with the rocket attack on Zagreb and the crimes committed by the forces in Croatia and Bosnia and Herzegovina between 1991 and 1995.