After Martic’s defense counsel Predrag Milovancevic drew conclusions from the premises that he put forth himself, the presiding judge said he had “the impression Milovancevic is testifying himself”, rather than presenting arguments to be confirmed by the witnesses in the course of the defense case 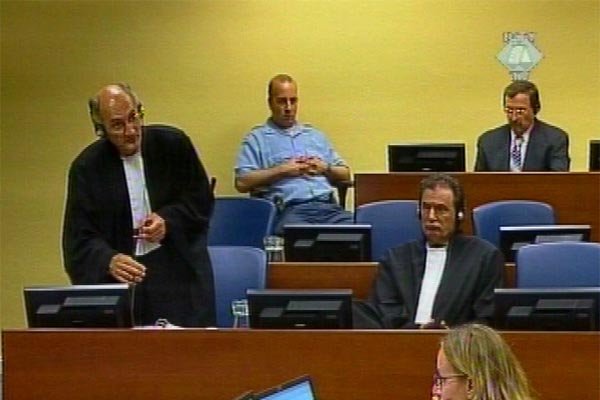 Predrag Milovancevic, defense attorney for Milan Martic
In the first three hours and a half of his opening statement, Milan Martic's defense counsel failed to mention any of the crimes his client is charged with. He did not say anything about how the defense intended to contest the prosecution allegations and what evidence he intended to rely on. Instead, he spoke about the ordeal of the Serb people in World War Two and the history of the break-up pf Yugoslavia.

In a long-winded explanation of the reasons for the break-up of the former Yugoslavia, Milovancevic presented the well-worn arguments, favored by the Belgrade authorities in the nineties. He said that Croatia and Slovenia were to blame for the war because of their “secessionist aspiration”, adding that the “key factors of the world order” worked with them to achieve the “destruction of Yugoslavia”.

He called the Croatian officers who had left the JNA ranks “traitors” and accused the Croatian side of reviving the Ustashe movement, illegal arming and distributing the arms to “only one ethnic group”. Unlike them, Milovancevic said, the JNA and Belgrade wanted to settle the crisis peacefully. To prove his point, he provided the examples of the pull-out of the army from Croatia and BH in 1991 and 1992. According to the defense counsel this is all clear evidence that the prosecution allegation about the existence of a joint criminal enterprise is “pure fiction”.

After patiently listening to his presentation for three and a half hours, the judges finally reacted. Judge Janet Nosworthy explained to the defense counsel that the purpose of the opening statement was for him to present the arguments to be corroborated by the witnesses in the course of the defense case. As the presiding judge noted, Milovancevic merely presented his arguments, corroborated them himself and then drew conclusions the whole time. “I have the impression that you are testifying, yet you are not a witness, you are a lawyer,” Judge Bakone Moloto cautioned the defense counsel.

Milovancevic then changed tack – he addressed the crimes in the indictment, saying that the Croats had been well armed in the villages where the crimes had been committed, and that it was civil war, not aggression against Croatia.

The defense will complete its opening statement Wednesday and then call its first real witness – Slobodan Jarcevic, former foreign minister in the former RSK. As has been announced, former Montenegrin president Momir Bulatovic should take the stand after the summer recess.