The judges decide to accept the recommendation that the accused be given a six-week break. The examination about Lieutenant-Colonel Janos Sel about the contents of his "work book" from 1998 and 1999 ended today 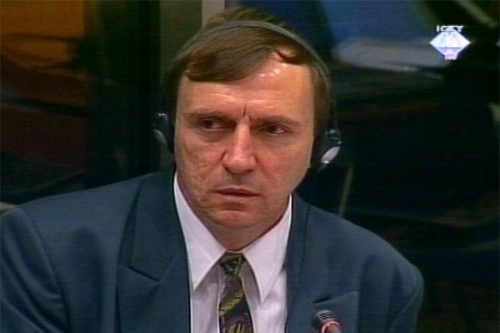 Janos Sel, defense witness for Milosevic
The Trial Chamber decided to grant the request of the accused to be given additional time to rest and adjourned the trial of Slobodan Milosevic today. The trial is scheduled to continue in six weeks, on 23 January 2006. This in effect means that the Trial Chamber accepted the recommendation of the Russian, French and Serbian doctors who had examined Milosevic in early November at his request and concluded that his health condition called for at least six weeks of rest.

Before the trial was adjourned, prosecutor Nice and accused Milosevic ended the cross-examination and re-examination of defense witness Janos Sel. During the conflict in Kosovo, he commanded a company in the 2nd Battalion of the VJ 549th Motorized Brigade. His testimony was suspended two weeks ago until the prosecution got the "work notes" Lt-Col Sel kept about the activities of his company during the Kosovo conflict. In the meantime, the prosecution had been able to contact some of the soldiers who had done their national service in his unit in 1998 and 1999. Their statements were presented to the Chamber in closed session. Sel claimed that two of the soldiers, designated as B and D, had never been in his unit. As for soldiers A and C, he said they had been there for training but had left the unit after five days. In other words, they had deserted and had never seen in any combat. The witness labeled as "pure fabrication" the claims the soldiers made in their statements. They accused Lt-Col Sel of ordering their soldiers to kill civilians and of boasting he had killed a six-month-old baby he had snatched from its mother's arms. He also denied that claim made by soldier D that the Obilic thermoelectric plant near Pristina had been used in late April 1999 to cremate the bodies of Albanian civilians who had been killed.

When he was asked why he had written, "burning haystacks, fences and houses – no" into his "work book" in April 1999, Lt-Col Sel said he had written it "because it was prohibited, not because someone from his unit had been doing it". Judge Bonomy, however, refused to accept the explanation for "issuing orders about something that is so obvious". According to him, the entry "means that this was done and that is why it had to be prohibited". Sel claims he doesn’t know that this – burning haystacks, fences and houses – was done anywhere.

The witness tried to explain away yet another entry in a similar way. He wrote, "Destroy the alcohol, put out the pigs and slaughter no more". According to him, the prohibition was not issued because the soldiers had been stealing and slaughtering pigs (although Sel admits there were such cases, particularly around 1 May), because of the risk of contagion from the pigs who "roamed around and ate everything".

In his brief re-examination, the accused Milosevic and Lt-Col Sel agreed that "there is nothing" in the work notes of the former company commander "to confirm the prosecution arguments".