MOTION TO RE-OPEN THE PROSECUTION CASE AGAINST MILOSEVIC DISMISSED

The Trial Chamber dismisses prosecution motion to present new evidence in the case against Slobodan Milosevic. Although some of the proposed evidence "has a certain evidentiary value", the Chamber decides that none of it "is of significance for the crucial legal issue: is the accused responsible for the crimes alleged in the indictment" 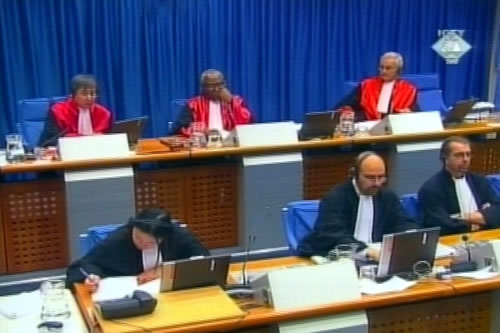 Trial chamber in the Milosevic case
The Trial Chamber dismissed today the prosecution motion for "limited reopening of the case" against Slobodan Milosevic for the purpose of tendering some ninety new pieces of evidence pertaining to the indictments for Kosovo and Bosnia and Herzegovina. Among them are the statements by six new witnesses.

The judges state in their decision that they are not satisfied the prosecution was "diligent" enough in their search for some of the new evidence and witnesses offered now, judging that they could perhaps been obtained before the prosecution rested its case.

The evidence that passed the "prosecution diligence test" was then put to the "relevance test" by the judges. According to them, the new evidence, in order to be admitted after the prosecution rested, should have "substantial evidentiary value for the determination of the individual guilt of the accused". Although they find that some of the proposed evidence "has a certain probative value", the Chamber decides that none of it "is of significance for the ultimate legal question of whether the accused is responsible for the crimes alleged in the indictment". Judging it to be "cumulative" and "similar in all important respects" to evidence already adduced by the prosecution during its case, the Chamber dismissed the prosecution motion for "limited re-opening of the case".

The prosecution primarily intended to use the new witness testimony to clarify the origin and contents of the video tape of the Scorpions abusing and executing six young men and boys from Srebrenica in 1995. Protected witness B-345 and three former Scorpions were supposed to testify about that. The Scorpions are Goran Stoparic, Slobodan Stojkovic, who had made the video, and protected witness TA 378 who had seen the execution and taken part in the removal of the victims' bodies.

Witness proposed under the pseudonym TA 377 was the commander of a tank company in the Yugoslav Army which opened tank fire, according to his statement, on the village of Racak from positions dominating the village on 15 January 1999. Milosevic and his witnesses strenuously deny any VJ involvement in the "anti-terrorist action" in Racak or any possibility that the village was shelled on that occasion.