LIMAJ AND MUSLIU ACQUITTED, BALA SENTENCED TO 13 YEARS IN PRISON

The prosecution failed to prove that Fatmir Limaj and Isak Musliu had command or any other role in the KLA camp in Lapusnik and the crimes committed there in the summer of 1998. Camp guard Haradin Bala was found guilty of cruel treatment, torture and murder of 9 detainees on the Berisa mountain. He was then sentenced to 13 years in prison 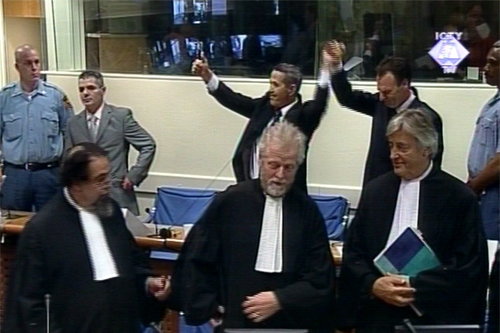 Isak Musliu, Haradin Bala and Fatmir Limaj during the sentencing
Former KLA commanders Fatmir Limaj and Isak Musliu were today acquitted on all counts of the indictment charging them with the crimes committed in the summer of 1998 against the detainees in the Lapusnik camp in Kosovo.

The Trial Chamber, with Australian judge Parker presiding, and with two other judges – Thelin from Sweden and Van den Wyngaert from Belgium stated in the judgment delivered today that the prosecution failed to prove beyond reasonable doubt that Limaj and Musliu had played any role in the camp and the crimes committed there against the Serb and Kosovar Albanian detainees. It seems that the crucial element was the issue of identification of the accused by former detainees from Lapusnik. As Judge Parker said in the summary of the judgment, the Chamber "was not persuaded of the honesty" of only witness who claimed to have seen Limaj on the Berisa mountain on 25 or 26 July 1998, immediately after Haradin Bala, together with one or two KLA soldiers, killed 9 Kosovar Albanian detainees. Those Albanians had been taken out of the camp after Lapusnik had been taken by the Serb forces.

According to the Trial Chamber, the only person responsible for the crimes in Lapusnik, is the camp guard Haradin Bala. He was found guilty of the participation in the murder on the Berisa mountain, and of cruel treatment of three detainees, maintenance of inhumane conditions in the camp and aiding in the torture of a detainee. In the determination of the sentence, Judge Parker noted, the Chamber took into account the fact that Bala was not in position of command in the camp, and that he did not commit the murders on the Berisa mountain on his own initiative but was "acting as a soldier under orders." Now, the persons who issued orders to Bala will apparently remain unidentified. Unless, of course, the prosecution proves to be more successful in the appellate proceedings, if there will be an appeal.

The judgment determines that there was a KLA camp in Lapusnik, that Serbs and Kosovar Albanians were detained there (the latter were those who were suspected of collaborating with the Serbian authorities). The Chamber further found that the detainees were held "in absolutely inhumane conditions", subjected to cruel treatment and torture. It was also determined that at least 12 people had been killed – three in the camp and nine in the Berisa mountains.

Since the Chamber found that it was not proven that the crimes were committed as part of a "systematic and widespread attack on civilians", all counts in which they are qualified as crimes against humanity were dismissed. The Chamber, on the other hand, was satisfied that there was a state of armed conflict between the Serbian forces and the KLA in Kosovo at the time when the crimes were committed. This is a prerequisite for the crimes Haradin Bala was convicted of to be qualified as violations of laws or customs of war.