WHY HAVE LIMAJ AND MUSLIU BEEN ACQUITTED?

Fatmir Limaj and Isak Musliu were acquitted of the charges relating to the crimes in the Lapusnik camp and the Berisa mountains because of problematic identification of the accused and failure to define the KLA command structure. The Trial Chamber found on the basis of evidence they had heard that there was a "strong possibility" that Limaj had participated in the crimes, but that it had not been proved "beyond reasonable doubt" 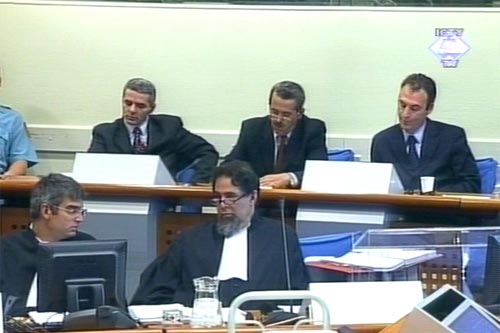 Isak Musliu, Haradin Bala and Fatmir Limaj in the courtroom
“Even though there is a strong possibility apparent on the evidence that Fatmir Limaj was active as a commander in the prison camp at times relevant to the Indictment [of the KLA unit in charge of the Lapusnik camp] at the time relevant for the indictment, the Prosecution has failed to prove this beyond reasonable doubt", the Trial Chamber hearing the Lapusnik case concludes.

The key reason that has prompted the Chamber to conclude that despite the "strong possibility" it cannot reach a guilty verdict was the problem with the identification of the accused. Some of the witnesses identified Fatmir Limaj as the KLA commander who was present in the Lapusnik camp from time to time. Serbian and Albanian civilians were held there in inhumane conditions; some of them were tortured and killed. Furthermore, a witness recognized Limaj on the Berisa mountains on 25 or 26 July 1998, when KLA soldiers executed nine Kosovo Albanians after the evacuation of the camp. But, because the witnesses described the accused differently, and because of mistakes in the process of identification made by former UNMIK police inspector Anargyros Keriakis, the Chamber concluded that there was only a "strong possibility" Limaj might be responsible. That, however, was not sufficient for a conviction before the Tribunal.

The witnesses mostly described the accused in different ways; in some cases, there were discrepancies between the statements they had given to the investigators in Kosovo and their testimony before the Tribunal. Vojko Bakrac and his son Ivan were in the camp at the same time, yet they gave differing descriptions of the person they said had been the "commander". The father said the man had a short beard, while the son claimed the "commander" had been clean-shaven. The judgment goes on to state that when Vojko Bakrac was giving his statement to the CCIU investigators in 2002, he was unable to recognize Limaj on a photograph. "Number 2 [Limaj] looks familiar, but I don’t know from where and I cannot connect him with this case," Bakrac said then.

While several witnesses mostly claimed that Commander Çeliku (Limaj's nom de guerre) was between 180 ad 185 cm tall, according to protected witness L-10, the man he thought was the commander was about two meters tall. He also testified the man had released him, giving him a written note signed as Commander Çeliku. The Chamber did not take that into account as evidence against Limaj, because the witness said he had thrown the paper away upon his return to his village.

Protected witness L-07 stated that he had seen Limaj in the Lapusnik camp when he had been taken to a room with Shukri Buja, a KLA commander and Commander Çeliku. He had known the latter from the press reports. In his testimony, Buja claimed that the man with him in the room had been Ymer Alushani, a/k/a Voglushi, who had been the commander of Lapusnik at the time. Because of contradictory testimony of the two witnesses, this identification was not accepted.

Witness L-96 is the only survivor of the execution on the Berisa mountain, after the evacuation of the Lapusnik camp in late July 1998. As he testified, Limaj arrived immediately before the prisoners were shot and said something to Bala who then released half of the prisoners and ordered the rest to sit down, told them, "this is your death penalty" and opened fire. L-96 rolled downhill and fled, as the guards fired on him. When he reported the incident to the Serbian police and the representatives of the international community in Kosovo, he did not mention Limaj once. He explained this failure in court by saying that at that time he felt it was important to "identify the killers", and that he was "not interested" in the commander. The defense claimed the witness had identified Limaj only after Limaj started making regular appearances on TV. He later admitted that the released prisoners had told him the man who had ordered their release on the Berisa mountains had been Limaj. For those reasons, the Chamber did not accept that identification either.

During its case, the prosecution tried to prove Limaj's command responsibility, but the Chamber ruled it had failed to do so. Prosecution witness L-64 was released from a prison in Kosovo where he was serving a sentence for drug trafficking offences, after he agreed to testify about the KLA structure. Although he claimed that Limaj had been a regional KLA commander in the area where the camp was, his testimony was rejected after it was determined in cross-examination that he based his knowledge on hearsay and rumours and that in fact he did not have any knowledge of the KLA command structure.

The prosecution thus had to rely, in its efforts to prove Limaj's command responsibility, on the testimony of Shukri Buja and Ramdan Behluli, former KLA commanders. When they were interviewed by the OTP investigators in 2002 and 2003, they confirmed that Limaj had been the commander of the region where Lapusnik was from May until the end of July 1998 – the time relevant for the indictment. At the trial, they changed their testimony and claimed that Limaj had assumed the position in August, or even in September 1996. Although the Chamber suspects the change in the testimony was due to "the sense of loyalty towards the KLA in general, and Fatmir Limaj in particular, on the part of Shukri Buja and Ramadan Behluli", it cannot rely either on their 2002 and 2003 statements to the investigators or on their testimony in court in 2005 as evidence.

The Chamber had fewer dilemmas when it acquitted Isak Musliu. The Chamber found he had been the commander of the unit in Lapusnik, but that the same post was held for a time by Ymer Alushani. Apart from the fact that Musliu's unit was stationed near the camp, the judgment notes that there is no other evidence showing he was the camp commander or that troops from his unit were on guard detail there. The witnesses who claimed to have recognized Musliu in the camp mostly said he had been wearing a mask and they had been able to identify him on the basis of his voice or his proficiency in martial arts. Witness L-96 was the only person who claimed he had seen Musliu in the camp without a mask. The Chamber could not admit that evidence because of the mistake made by former UNMIK police inspector Keriakis who had shown the witness Musliu's photograph before the witness had identified him, in contravention of the rules.

The only one who was proven "beyond reasonable doubt" to have participated in the torture of the prisoners in Lapusnik and the murders on the Berisa mountains is prison guard Haradin Bala. He was sentenced to 13 years in prison.

The prosecution is currently analyzing the judgment, trying to identify ground for appeal. The deadline for filing notice of appeal is 30 days.