WITNESS WITH A REPUTATION

After the summer recess, the trial of Slobodan Milosevic continued today with the testimony of defense witness Muharem Ibraj. Former chief of the "local security" from the Djakovica area says he had no information about any crimes committed by the VJ and police against the Albanian civilians in 1999. The prosecutor notes that the witness himself has been accused of such crimes 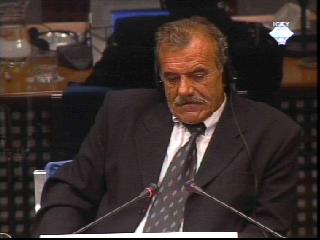 Muharem Ibraj, defense witness for Milosevic
“Only those Albanians whose departure could not be prevented by the VJ left Djakovica in the spring of 1999," claims Muharem Ibraj, Slobodan Milosevic's defense witness. He adds that "the police and the military returned the Albanians to their homes," contradicting the allegations in the indictment and the testimony of prosecution witnesses that the FRY and Serbian forces systematically expelled Kosovo Albanians from their homes during the NATO air campaign from March to June 1999.

Ibraj lived in the village of Osek Hila near Djakovica, but he claims he had information about the events in the wider area, including the town. He says he did not hear of any killings committed, according to the indictment, by the FRY and Serbian forces – for instance in the village of Cerim, with more than 50 civilian casualties.

NATO air strikes were the cause of the departure of many Albanians, the witness says, adding that the Djakovica mosque, factory and police station were also demolished by NATO bombs. When Milosevic asked if it was possible that "some of our police destroyed houses," Ibraj replied he did not know of any such cases.

Muharem Ibraj was appointed by Momcilo Stanojevic, president of the municipality , as the chief of the "local security". A prosecution witness testified that this security force was made up of Albanians loyal to Serbia. Ibraj, however, believes that the important thing was that "wherever the security was active, no Serbs or Albanians came in harm's way." Ibraj adds that in June 1999 he had to flee from Kosovo and that after the deployment of KFOR six members of his family got kidnapped because they did not collaborate with the KLA. When asked by a judge why he did not support the KLA, Ibraj said, "the KLA was against the state."

The prosecutor notes, however, that Ibraj and his men enjoyed a "reputation of violent criminals" and that they abused local Albanians. He corroborated his claims using reports by the OSCE, the Pristina Council for the Protection of Human Rights and the Democratic League of Kosovo, a party that Ibraj ostensibly supported. Ibraj was charged with the murder of an Albanian in early March 1999, but a court accepted his claim that it had been done it in self defense. The witness rejects the allegations that the "local security" committed crimes and rapes. "Those reports were published after the deployment of KFOR, people could say whatever they pleased at the time."

His testimony will continue tomorrow.