NOT IN THE WAR DIARY? IT DIDN’T HAPPEN, THEN 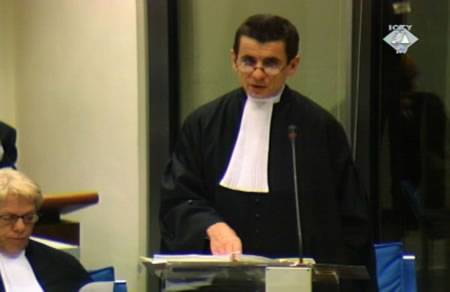 Geoffrey Nice, prosecutor at the Slobodan Milosevic trial
The prosecution managed to locate some of the Kosovo Albanians who had criticized the KLA and NATO in interviews with RTS reporters in the spring of 1999, at the same time expressing their gratitude to the military and the police for their protection and assistance. Recordings of those interviews were shown two weeks ago in courtroom, during the direct examination of General Bozidar Delic by the accused Slobodan Milosevic.

As General Delic's cross-examination continued, prosecutor Nice read out today the statements of several persons who appeared in those tapes whose identities had been verified. They now claim they gave the statements in front of the cameras in the RTS studio in Prizren under direct threat of violence or that in fear of reprisals, they said things they assumed the uniformed reporters and their armed escorts "would want to hear."

General Delic, however, thinks those Kosovo Albanians spoke the truth in 1999, and that "now they're saying what the KLA wants to hear," because to do the opposite would be to risk their lives and the lives of their families. The general does not deny, however, that the reporters in Prizren wore military uniforms and that they were escorted by the police and the people from the local authorities. He does not see that as a reason for the interviewed Albanians from Kosovo to fear them.

The prosecutor then asked questions about some sites In Kosovo where crimes had been committed and that were located in the area of responsibility of the 549 Motorized Brigade, which was under General Delic's command in the spring of 1999. The prosecutor asked the witness to show entries about the events in Bela Crkva and Suva Reka in the spring of 1999 in his war diary and other documents Delic had brought to assist Milosevic's defense. The indictment and prosecution witnesses claim that the military and police killed several dozens of people in those two villages in March and April of 1999, burning, destroying and looting houses and expelling a large number of civilians. According to General Delic, the fact that none of those events were recorded in the documents proves that they did not happen.

Just before the end of today's round of cross-examination, the prosecutor asked General Delic to explain how the bodies of Kosovo Albanians from Suva Reka and Meja – from his area of responsibility, that is – had ended up in mass graves in Batajnica near Belgrade. The general doesn't know anything about it, he read in the papers about some bodies having been found "near the Danube", but he claims he doesn't know where in the Batajnica compound (which housed the base of the Special Anti-terrorist Units of the Serbian MUP) those mass graves were.

Noting that in the spring of 1999 the territory of Kosovo had been under absolute control of the military and the police, prosecutor Nice put it to the witness that a logistically complex operation to exhume the primary graves and transport the bodies to Batajnica "had to have been carried out with his knowledge and consent", but General Delic rejected the suggestion indignantly.

General Delic's testimony, which began on 21 June 2005, should end tomorrow.