VUJADIN POPOVIC “NOT GUILTY” OF THE CRIMES IN SREBRENICA

Former security chief in the VRS Drina Corps, Vujadin Popovic today pleaded not guilty on any of the six counts of the indictment charging him with genocide and other crimes committed in Srebrenica in July 1995. The prosecutor again announced that they would be filing an application for the joinder of indictments for the eight persons accused for the Srebrenica crimes who are already in the UN Detention Unit. The only person missing is General Zdravko Tolimir 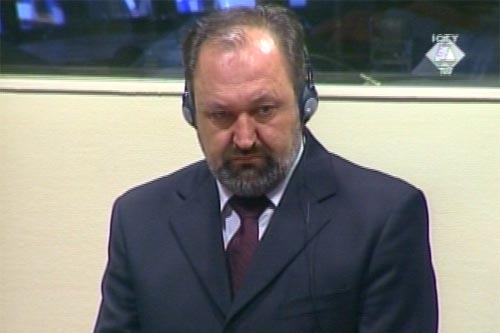 Vujadin Popovic in the courtroom
After his transfer to the UN Detention Unit last Thursday, former security chief in the VRS Drina Corps, Vujadin Popovic pleaded not guilty on any of the six counts of the indictment charging him with genocide, crimes against humanity and violations of laws and customs of war in July 1995 in Srebrenica. Popovic is charged with participation in the joint criminal enterprise whose objective, as alleged in the indictment, was to make it impossible for the Muslim community to survive in that part of Bosnia and Herzegovina, by destroying all men of military age and deporting tens of thousands of women and children.

The other persons charged with participation in the same joint criminal enterprise with Popovic are Ljubomir Beara, Vinko Pandurevic, Ljubomir Borovcanin, Drago Nikolic, Milorad Trbic, Radivoje Miletic, Milan Gvero and Zdravko Tolimir. All of them – with the exception of Tolimir, who is still at large – are in the UN Detention Unit. The prosecutor announced today an application for a joinder of their indictments, so that they can be tried together.

When the other persons accused of the crimes in Srebrenica entered their pleas in the past weeks, prosecutor Peter McCloskey already indicated the prosecution would be seeking a joinder. However, he did not have the time to apply, because, as he complained today, “every time I sit down to write the application, another accused comes in.”