Amir Kubura's defense claims in its opening statement it will try to prove that the accused was not the acting commander of the 7th Muslim Brigade in the spring of 1993, when the crimes he is charged with on the basis of command responsibility were committed 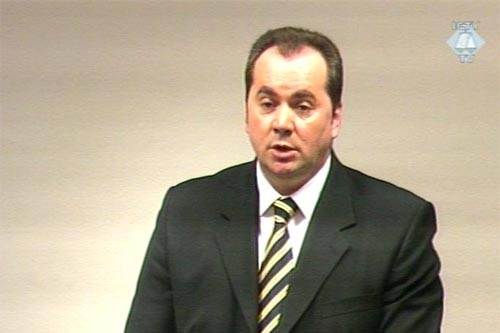 Amir Kubura in the courtroom
In his opening statement, Amir Kubura's defense counsel announced that the defense team would be trying to prove "in a clear and simple way" that their client was not responsible for the crimes committed by the members of the 7th Muslim Brigade and the mujahedin in Central Bosnia in 1993.

The prosecution arguments are "naïve and one-dimensional", claims lawyer Rodney Dixon. In his opinion, the prosecutors have "simply misunderstood things."

Ámir Kubura was appointed the commander of the 7th Brigade "only on 6 August 1993," his lawyer claims. In the months before the appointment, when the crimes Kubura is charged with on the basis of command responsibility were committed, the accused "was not the acting commander", but merely the "chief of staff of the 7th Muslim Brigade, with no command authority or responsibility over the units," the defense counsel claims, rejecting the arguments put forward by the prosecutor that the chief of staff takes over command in the absence of this superior.

After the war broke out, Kubura left the JNA and joined the Territorial Defense in Kakanj. When the 7th Muslim Brigade was established, he was appointed the assistant to the chief, and then in March 1993 the chief of staff of the brigade. The defense claims that the prosecutor failed to prove that Kubura really did exercise the duties of the commander, and that commander Asim Koricic really did leave Central Bosnia in April 1993.

The defense will be proving that "no member of the 7th Muslim Brigade was even present, let alone that any of them committed the crimes" in the village of Miletici and Maline. As regards the abuse in the Zenica Music School and in the Sretno Motel in Kakanj, the defense claims that Kubura did not know and did not have reason to know about them. In response to charges that he is responsible for the destruction and plunder in the area of Ovnak and Vares, the defense counsel will try to prove that it is impossible to determine who actually caused the destruction.

Kubura's defense notes that the key question at this trial is "who was responsible for the acts by the mujahedin" The prosecutor's attempts to establish links between the foreign fighters and the 7th Muslim Brigade are not consistent or clear, in the opinion of the defense. "Amir Kubura was a symbol of all those things that the mujahedin wanted to destroy," in BH, and that is why in the summer of 1993, they tried to assassinate him, Dixon claims.

After the opening statement of the defense, the accused Amir Kubura addressed the Trial Chamber briefly.