GOJKO JANKOVIC OPTS NOT TO PLEAD

Since the accused stated that “the indictment is not completely clear” to him and he did not have the opportunity to consult his appointed counsel, the judge scheduled his further appearance in 30 days 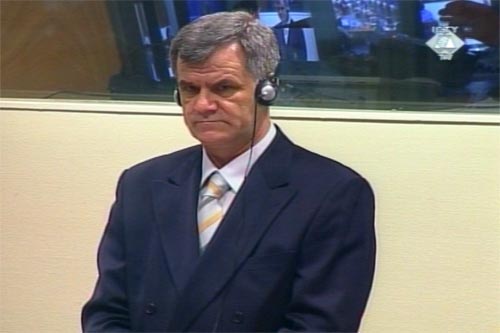 Gojko Jankovic in the courtroom
The accused Gojko Jankovic, who surrendered to the ICTY on Monday after nine years of being a fugitive, was not able to enter his plea today on the counts of the indictment charging him with rape and sexual enslavement in Foca 1992.

As he replied to the questions of the Chinese Judge Liu Daqun, the accused said that he had not had an opportunity to talk to defence counsel Aleksandar Lazarevic who was assigned to him for this hearing, and that the “indictment is not completely clear” to him. Judge Daqun then concluded that the accused was unable to enter a plea today and ordered that a new appearance should be scheduled within 30 days.
The indictment, issued in 1996, states that Jankovic was the commander of the Military Police and a leader of a paramilitary formation in Foca in 1992. He is charged with rape and sexual enslavement of Bosniak girls and women in notorious Karaman’s house and other locations in Foca where the detained Bosniak women were subjected to sexual abuse.
Radovan Stankovic, currently in the UN Detention Unit, and Dragan Zelenovic, still at large, are indicted in the same indictment. The OTP filed an application late last November for the referral of the case to the courts in Bosnia and Herzegovina.

The indictment for Foca rapes included also Dragoljub Kunarac, Radomir Kovac and Zoran Vukovic. Final judgements have been delivered in their cases sentencing Kunarac to 28 years, Kovac to 20 and Vukovic to 12 years in prison.