WHERE WILL THE ACCUSED PRESENT HIS ALIBI DEFENSE: IN THE HAGUE OR SARAJEVO?

The time and venue of Radovan Stankovic Rasa’s trial will depend on the decision of a special Trial Chamber whose job it is to deal with requests for the deferral of cases to domestic courts in the former Yugoslavia. 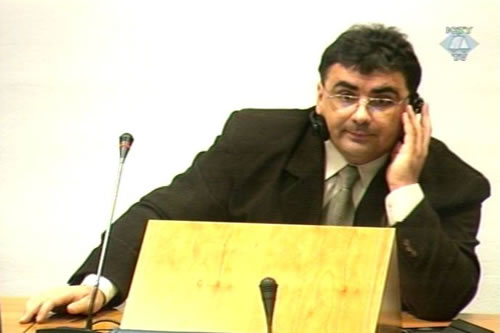 Radovan Stankovic - Raso in the courtroom
Both the defense and the prosecution are ready to proceed to trial in the case of Radovan Stankovic a/k/a Rasa, accused of the rape and enslavement of Bosniak women in Foca. The date for the start of the trial, however, has not been determined yet, not even at today’s status conference. The reason is the request filed by the prosecution two months ago, seeking the deferral of this case to the BH State Court. A special Trial Chamber of the Tribunal – set up specifically to deal with such requests – has not yet ruled on it.

Radovan Stankovic’s defense is opposed to the request, deeming it to be in contravention of the Tribunal’s Statute and Rules of Procedure and Evidence. Stankovic’s defense counsel Milenko Radovic said, “The accused has been in detention for two and a half years, the defense was ready to proceed to trial six months ago,” and the Statute of the Tribunal guarantees that the accused has the right to be tried “without undue delay.”

The accused and his lawyer have objections to the jurisdiction of the War Crimes Chamber at the BH State Court, which should try the case. In their opinion, the only court in BH that may have jurisdiction is the District Court in Trebinje, because this is where “the crime was allegedly committed and where the accused surrendered.”

Amin El Mahdi, the pre-trial judge, reminded the parties that another Trial Chamber was dealing with the request itself, noting that preparations for the trial should continue notwithstanding the status of the request.

Prosecutor Jan Wubben stressed that although the request for deferral is the prosecution’s priority, it is practically ready to go to trial. He said the prosecution intends to call 13 to 15 witnesses, which would take about 50 working hours--slightly more than two weeks. The prosecution did not submit a list of witnesses, asking that the defense first disclose additional information about the alibi defense the accused intends to use.

Stankovic claims that he spent “90 percent of the time relevant to the indictment – from April until November 1992 – on the front as a fighter,” and that he went to Karaman’s house, where women and girls from Foca were detained and where the crimes were committed, “only twice.” The prosecution bases its request on the Tribunal Rules, which say that the defense must state the names of witnesses and specify other evidence it will use to corroborate the accused’s alibi before the beginning of trial.

The defense refuses to do so, indicating that it will disclose additional information “at the end of the prosecution case.” While he did not take into consideration the arguments of the accused about “the intentions of the prosecution to abuse the information,” judge El Mahdi did rule at the end of today’s status conference that the defense “does not have to provide the additional documents immediately,” adding that he would state in his report to the Trial Chamber whether the pre-trial proceedings in this case were completed or not.

As at previous status conferences in the case against Radovan Stankovic, the accused again aggressively tried to use the hearing to levy accusations that the prosecution, judges and the entire Tribunal were biased and serving a “conspiracy against the Serb people.” The judge told the accused once again that he would not tolerate his “provocative behavior,” warning him that he did not have the right, sitting in the dock, to either “compliment or criticize” the Tribunal.

According to the Rules, the next status conference should be held within 120 days. The Trial Chamber’s decision dealing with the deferral of the case to domestic courts should be known by then.