The advantages of the EU Diplomatic Monitoring Mission in Kosovo - according to Dietmar Hartwig, Milosevic’s defense witness. The Mission had between 18 and 40 members, as opposed to the OSCE Verification Mission which had about 2,000 observers 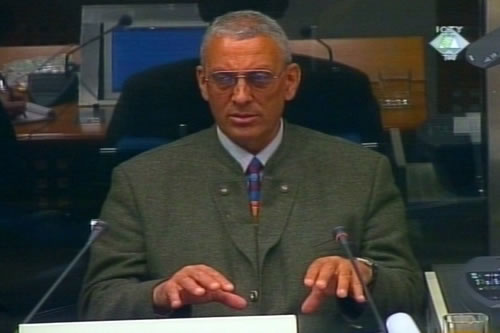 Ditmar Hartvig, witness in the Milosevic case
In late 1998 “Serbs began gaining the sympathies of the world, the Kosovo Liberation Army was under pressure to halt its attacks and then horrible things happened in Racak”, said Dietmar Hartwig, former lieutenant colonel of the German Army who headed the office of the EU Kosovo Diplomatic Mission (EU-KDOM) in early 1999. In his opinion this was not an accident. “One could foresee that something would happen that would change the mood radically,” he said today at the trial of Slobodan Milosevic.

In his direct examination, responding to the questions of the accused, which were leading as usual, Hartwig confirmed the basic argument of Milosevic’s defense that the Serbian security forces merely “responded” or “reacted” to the attacks and provocations of the KLA, and in their response, they “did not act aggressively, but with great restraint”, strictly taking care to protect the civilian population in Kosovo, regardless of their ethnic background. Hartwig also confirmed that there was “exaggeration” in the Western media reports and governments on the number of villages that were destroyed and the scale of destruction. In the three months he spent in Kosovo in late 1998 and early 1999 the witness, as he claims, did not learn anything about the Serbian security forces persecuting Albanians, forcing them to leave their homes. He never heard any specific complaints about the way the Albanians were treated by the police.

At the beginning of the cross-examination, prosecutor Geoffrey Nice first clarified that the EU Kosovo Mission had had between 18 and 40 diplomatic observers. Then he compared the Mission’s findings (referred to by the German lieutenant colonel during his testimony) with those of the OSCE Verification Mission, which had about 2,000 members covering the same area. Admitting that there was a considerable disproportion in size between the two missions in Kosovo, Hartwig nevertheless noted that the European mission – although it had fewer members – “had a great advantage that it had been in Kosovo longer than the OSCE mission and had been able to establish contacts with both sides.”

The prosecutor was particularly interested in the contacts the witness had with the side represented by Sreten Lukic, the then chief of the Serbian MUP forces in Kosovo and one of the four military and police generals indicted for crimes against humanity committed in the first half of 1999. In one of the interviews conducted with him as a suspect by the OTP investigators, General Lukic spoke about a letter sent to him by Dietmar Hartwig after his departure from Kosovo on the eve of the NATO air strikes. In his letter, Hartwig thanks Lukic for his cooperation, states that Lukic’s views “influenced him a great deal” and expresses his regret that the general and the forces under his command “were unable to use all the means at their disposal” to crush the KLA. Hartwig, however, denied that Lukic had “had crucial influence” on him and rejected the prosecutor’s claim that he “supported the policy of strong strikes to destroy the KLA.”

The accused Milosevic will coduct and complete his re-direct examination of Dietmar Hartwig tomorrow.