DOCTOR AND HUMANIST DOES NOT TRUST ALBANIAN COLLEAGUES AND RAPED WOMEN

Dr. Vukasin Andric, who described himself during his cross-examination today as a “doctor and a humanist” expressed his absolute mistrust towards Kosovo Albanians – be they his fellow doctors, lawyers, ordinary people or victims of crimes Slobodan Milosevic has been charged with 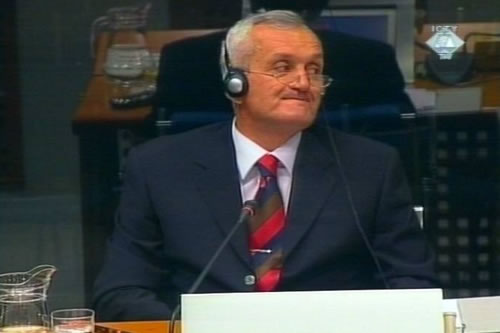 Vukasin Andric, defense witness for Milosevic
As his cross-examination continued, Dr. Vukasin Andric maintained his chief argument that “NATO aggressors” and “KLA terrorists” were responsible for the crimes in Kosovo. If there were any crimes committed by the Serb side, they were committed by “individuals” and “criminals”, Slobodan Milosevic’s defense witness claimed categorically.

Dr. Andric, who was the secretary of health and the coordinator for the civilian authorities, military and the police in the province in the first half of 1999, could not reply to a question put to him by prosecutor Geoffrey Nice why the bodies of Kosovo Albanians had been transported in refrigerated trucks to Serbia and buried in mass graves (the biggest was located at the MUP training area in Batajnica near Belgrade) if they had indeed been killed by “individuals” and “criminals”. According to the official data of the Serbian authorities , more than 800 bodies of Kosovo Albanians were exhumed from those mass graves. The witness claims he does not know anything about that and that he, as the provincial health secretary, had to do with the “clearing operations”, mostly with “the removal of the carcasses of the dead cattle.”

Dr. Vukasin Andric, who described himself several times during his cross-examination today as a “doctor and a humanist” expressed his absolute mistrust towards Kosovo Albanians – be they his fellow doctors, lawyers, ordinary people or victims of crimes Slobodan Milosevic has been charged with. The prosecutor confronted the witness with their statements by which parts of his testimony are called into question – about the reasons for the mass exodus of the Albanian population from Kosovo. Dr. Andric rejected all that as “untruth” or “absolute lies”, maintaining that they were all fleeing before “NATO bombs” and under the “pressure from KLA terrorists”.

After Dr. Andric said last week, in response to Slobodan Milosevic’s questions, that the allegations of rape made by Albanian girls and women were “fabrications – one should not waste breath on them”, the prosecutor pointed out today that victims of those crimes testified before court and that evidence about girls who had been raped and whose bodies had been thrown into wells had been presented. Reminding him of the Hippocratic oath, the prosecutor asked the witness if he claimed that all those women had lied because they were “Albanian extremists”. Dr. Andric replied that he “as a doctor and a humanist” did “not know of any such cases”, noting again that there could have been “individual cases, like there are in peace-time, which has nothing to do with official policy.”

At the end of his testimony, Dr. Vukasin Andric sought permission to address the Chamber, but the Chamber did not allow him to, noting that his request was “unusual.”

After Dr. Andric, Milosevic called to the witness stand Dr. Dobre Aleksovski, a Macedonian doctor who was head of the emergency medical service in Skopje at the time of the NATO air strikes. The service had mobile teams that were dispatched from time to time to refugee camps located at the border, where thousands of Kosovo Albanians were gathered.