FREE INTERVIEWS IN THE PRESENCE OF THE AUTHORITIES

Video tapes of interviews conducted by Milosevic’s defense witness Barry Lituchy with Kosovo Albanians were shown today in closed session. Prosecutor’s objections to the admissibility of such evidence were overruled 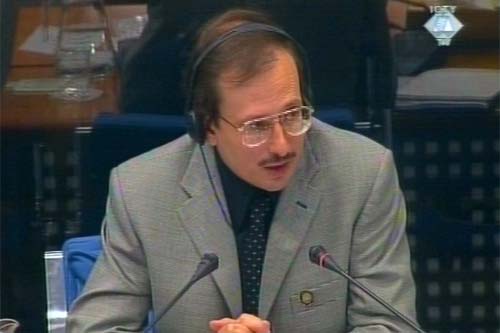 Nice said that, with the permission of the Chamber, one of the OTP investigators tried to get in touch last night with one of the two Albanians interviewed by Lituchy in 1999. He managed to get in touch with one of them, who told him that in 1999, during his stay in Belgrade, he had been “giving a lot of interviews” which had been used for “propaganda purposes.” He was able to recall an interview conducted in English, “in the presence of Serbian MUP police officers in plain clothes” in which he “replied to all questions in the manner which was expected from him by the authorities” because he “was concerned for the safety of his family.” When the investigator told him that there was a video tape of the interview, the Kosovo Albanian said that “it would be better to play it in closed session, because [he] probably does not stand behind the statements made in that interview.”

Despite Nice’s warning that it was “dangerous” to admit such material into evidence, the judges refused to reconsider their decision. In the brief time he testified in open session, Lituchy quoted some of the answers given by the Albanians he had interviewed. One of them, Lituchy says, stated that the “KLA hunted him like an animal”, that they “went around with his photograph looking for him to kill him,” and that apart from him, “about 20,000 members of his party, Kosovo Albanians all, were forced to leave Kosovo.” The other interviewee, Lituchy claims, said he had left Kosovo “because he did not want to live under the KLA,” since “the KLA is the worst possible thing in the world for Albanians.”

After that, the court went into closed session in order for the judges to hear what those Kosovo Albanians said in the interviews which, as the prosecutor claims, had been conducted in the presehnce of the authorities.