The prosecutor introduced a large number of documents in the course of Vladislav Jovanovic’s cross-examination in an attempt to prove that the authorities in Belgrade were informed thoroughly and in great detail of everything that was happening in Bosnia and Herzegovina between 1992 and 1995, including the massacre in Srebrenica 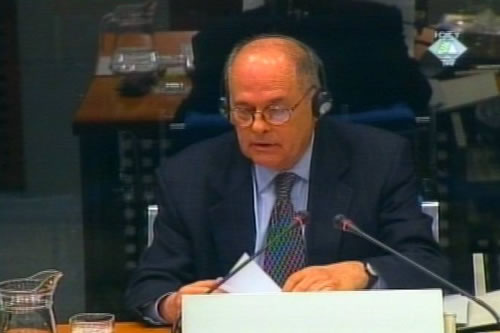 Vladislav Jovanovic, defense witness for Milosevic
The prosecutor used the cross-examination of Vladislav Jovanovic, former Serbian and FRY foreign minister, to admit into evidence dozens of documents showing that he, the cabinet in which he served, and consequently the accused Slobodan Milosevic were informed about what was happening in Bosnia and Herzegovina during the war years.

For the most part, these are diplomatic dispatches that were coming into the Foreign Ministry in Belgrade from 1992 to the end of 1995, but also UN Security Council resolutions and other documents. Their authors express concern with the developments in BH and condemn certain acts of Bosnian Serbs, such as the siege and shelling of Sarajevo, attacks on protected areas, forcible transfer of civilians, blocking of humanitarian aid and taking UN blue helmets as hostages. Among them is the Security Council resolution dated 16 April 1993, demanding that the FRY “immediately take every measure to prevent the crime of genocide in BH”. Several documents urge the Belgrade authorities to “use their influence” with the Bosnian Serb to make them stop such acts.

The prosecutor mostly asked Jovanovic to confirm whether he had indeed received such dispatches or resolutions; rarely did he ask the witness to make commends. The prosecutor took a little more time with the dispatches and documents from July 1995 in which the Foreign Ministry in Belgrade is informed about a VRS attack on Srebrenica, the shelling of the refugees in Potocari, the capturing of some thirty Dutch blue helmets and the threats that they would all be killed, as well as about the deportation of tens of thousands of women and children.

Before the prosecutor read out to him the dispatches from July 1995, Jovanovic said that he had learned about the events in Srebrenica from the press, that the news had “shocked” but that he had taken it with “a grain of salt”, because, as he said, Bosnian Serbs had often been blamed for what they had not done. The prosecutor asked why he had not called General Mladic and what he had done to get information about an event of this magnitude, Jovanovic replied that he had “waited for the affair to be cleared up and to be confirmed by other sources.”

Two months after Srebrenica, in September 1995, Jovanovic was appointed the permanent representative of the FRY in the UN. In November 1995, in this capacity, he delivered a letter from the FRY Government to the President of the Security Council rejecting the claims that the Yugoslav Army had taken part in the “liberation of Srebrenica” as unfounded. When the prosecutor asked him “who was liberated – the 30,000 women and children who had been expelled from there, or the 7,000 men who had been killed,” Jovanovic replied that this was “a terminology mistake” and that instead of “liberated” the text should have read “occupied.”

The prosecutor then read an excerpt from a letter Jovanovic sent to the President of the Security Council on 18 December 1995, drawing his attention to “new facts” about the events in Srebrenica. According to Jovanovic’s “new facts”, after the Serb forces had entered Srebrenica, there was a conflict between the “Muslim soldiers who wanted to surrender and those who wanted to continue to fight”, in which they “killed each other en masse.”

Jovanovic explained that in this case it had been his “error”. The letter was written by his deputy at the mission on the basis of the information received from the Republika Srpska authorities, and he “signed it in a hurry”, sending it to the President of the Security Council by mistake, instead of to the head of the Russian mission who was supposed to receive it.