MILOSEVIC WILL NOT BE CALLING MLADIC AS HIS WITNESS

In the course of Patrick Barriot’s testimony about what Ratko Mladic had told him about the events in Srebrenica, Presiding Judge Robinson reminded Milosevic that he had “every right to call General Mladic as a witness”, but the accused responded that he would not do that as he did not want to assist in his arrest 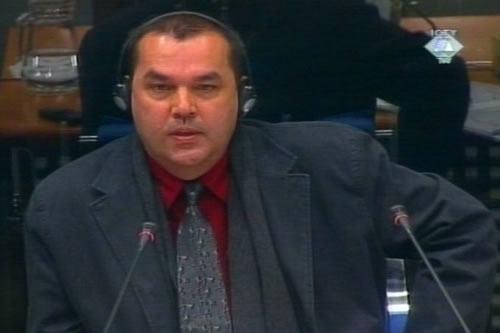 Patrick Barriot, defense witness for Milosevic
Mohammed Atta, one of the masterminds of the terrorist attack on the USA on 11 September 2001, had allegedly been to the village of Bakotic near Maglaj in Bosnia and Herzegovina in 1999. Interpol requested the BH Ministry of Internal Affairs to check that information in September 2001, and the Ministry duly informed the President of the Council of Ministers. According to Slobodan Milosevic and his defense witness, Patrick Barriot, Atta’s presence “confirms the existence of a terrorist network in Bosnia and Herzegovina with direct links with the 11 September events”.

When asked by the judges how he had gotten hold of that document, Patrick Barriot responded that he had received it from the French intelligence service and that he had been allowed to use it publicly since it was not “classified”. However, in the cross-examination, Chief Prosecutor Carla Del Ponte noted that the document had come from a different source, since it has the markings of a fax sent by the Republika Srpska government. Barriot countered her claim that the French authorities “would never have allowed such a document to be presented in public” by saying that he “did not say that the French authorities had allowed him to do so, but had not prohibited him from doing so”, just as they had prohibited him from using other documents, such as the list of French blue helmets allegedly killed by “Muslim snipers on the orders of Alija Izetbegovic.” He did not want to say who he had sought the permission from, i.e., who had prohibited him from making the list public.

In his direct testimony, Barriot spoke at length about what Ratko Mladic had told him about the events in Srebrenica in July 1995. According to Mladic's version, as interpreted by the French colonel, most of the casualties were caused in the fierce fighting on 12 and 13 July between the Serb forces and about 15,000 armed Muslims that were trying to break through in the woods around Srebrenica. Barriot said that Serbs had lost about 500 soldiers in the fighting, while Muslim casualties ranged between 1,500 and 1,800. Furthermore, as Barriot claims, Mladic allowed that it was possible that “100 captured Muslims at the most” had been executed “because of hatred and revenge – by Serbs whose families had been massacred in the attacks launched by Oric’s forces on the Serb villages in the Srebrenica enclave.” Barriot claims that Mladic told him personally that neither him nor any other officer in the VRS command had ordered the killing of the prisoners.

In her cross-examination, Del Ponte challenged this version of Srebrenica events by a report of the Commission established by the Republika Srpska government which admitted that more than 7,000 Muslims had been killed in the enclave in July 1995. Barriot, however, refused to accept this, quoting the figure of 1,500 “identified victims” and another 1,000 exhumed bodies. He claims that the RS Commission report was done “under the dictate of the High Representative Paddy Ashdown.”

In the course of the testimony about Srebrenica, Presiding Judge Robinson told Milosevic that he had “every right to call General Mladic as a witness”, but the accused responded that he would not do that as he did not want to assist in his arrest.