HOW THE SANU MEMORANDUM GOT AWAY

Was the famous SANU Memorandum made public “by accident”, as one of its authors Academy member Kosta Mihajlovic claims, or was it leaked on purpose in order to produce certain effects in the public, as the prosecution contends. 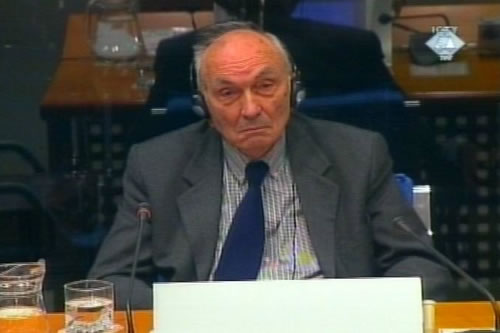 Kosta Mihajlovic, defense witness for Milosevic
The Memorandum of the Serbian Academy of Arts and Sciences (SANU) is an “intervention document, not a platform,” according to one of its authors, Academy member Kosta Mihajlovic.

Testifying as Slobodan Milosevic’s expert witness, Mihajlovic said today that “harsher language” was used in the Memorandum on purpose, in order to wake up the Serbian political leadership, unaware of the scale of the crisis the country was in. The Memorandum was not supposed to be made public, he said. The intention of the authors was to submit it to the Serbian Presidency or Assembly, but the document “got away”. Its publication was not authorized, however, it was later used as a pretext for attacks on the Serbian Academy of Arts and Sciences. According to the witness, the attacks were “unjustified” because the Memorandum was only an overview and assessment of the situation and a warning that measures should be taken. Mihajlovic claims that it merely “insists on the political and economic equality for Serbia and nothing more than that.”

Prosecutor Nice tried to challenge the version of events. According to him, the Memorandum did not “get away” by accident; it was published on purpose in order to produce certain effects in the public. Its ostensible “confidentiality” merely served to stoke up interest. In order to corroborate the argument about the intentional leaking of the secret document, Nice quoted from a text written by Mihajlovic in which he states that the Memorandum “was well received in the public”, that its “lucid analysis and clear message had a strong effect on the development of the public opinion” and that it was “printed and copied and distributed all over the place.”

Mihajlovic, however, maintained that the Memorandum “found itself in the public domain by accident, contrary to the wishes of its authors,” who do not bear any responsibility for the fact that some enterprising people turned it into a great business opportunity, printing and selling it, “even at green markets”, he said.

When the prosecutor noted that Mihajlovic’s expert report contains “sections that have been copied verbatim from the Memorandum”, Mihajlovic responded that it was “possible”, since he was one of the authors of the Memorandum and he did “not have two heads and to minds.”

In his cross-examination, the prosecutor tried to get Mihajlovic to explain about the functioning of some commissions and councils in which he had participated in the early nineties at Slobodan Milosevic’s invitation, but the witness, who is over eighty years old, was unable to remember any significant details from those meetings.

The trial of Slobodan Milosevic will continue on 11 January 2