After a series of witnesses members of the Serbian Academy of Arts and Sciences, particularly of Cedomir Popov and Slavenko Terzic, the impression is that the prosecution has been much more convincing and successful in the presentation of its arguments on Greater Serbia than it was during its case 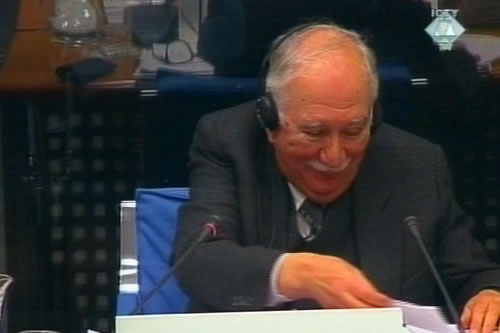 Cedomir Popov, defense witness for Milosevic
The unification of all Serb lands would not “amount to a Greater Serbia,” according to Academy member Cedomir Popov, Slobodan Milosevic’s expert witness. When asked by Judge Robinson what such a state would be called, the witness replied: “Serbia”. When the prosecutor Geoffrey Nice remarked that this state would be somewhat greater, Popov agreed that it would be “a somewhat greater Serbia.”

As the cross-examination of Milosevic’s expert for the “Greater Serbia myth” continued today, the prosecutor noted that at certain points in history, when the “Serbia’s dominance was under threat”, attempts were made to turn that “myth” into reality, to implement it on the ground. The prosecutor invited the witness to look at several maps showing “desirable borders of Serb lands” created in the 1st and 2nd World Wars and on the eve of the war in BH, and to compare them with the map showing territories controlled by Bosnian and Croatian Serbs in December 1992. On all the maps shown, the “western border of the Serb lands” coincided exactly or nearly with the famous Karlobag-Karlovac-Virovitica line. Popov, however, refused to admit that it had anything to do with Greater Serbia.

In re-direct, Academy member Popov agreed with Milosevic’s suggestion that the December 1992 map – when the Serb forces controlled about 70% of BH and a third of the territory of Croatia – in fact represented an “ethnic map” because it showed territories in which Serbs were in the majority.

After a series of witnesses members of the Serbian Academy of Arts and Sciences (SANU), particularly of Cedomir Popov and Slavenko Terzic, the impression is that the prosecution was much more convincing and successful in the presentation of its arguments on Greater Serbia than it was during its case.

As the hearing today drew to a close, yet another Academy member, Kosta Mihajlovic, began his testimony. As Milosevic's expert witness, he submitted a report on the role of economic factors in the break-up of Yugoslavia. At the beginning of his testimony, which is to continue tomorrow, Mihajlovic said that in the former Yugoslavia the “policy to slow down Serbia’s development was openly pursued”, while Slovenia and Croatia constantly improved their economic position.

When asked by Judge Robinson about the relevance of the “lecture” held by Academy member Mihajlovic, Milosevic responded that “Serbia’s dominance” is one of the basic arguments of the prosecution, yet that this testimony showed that “not only was Serbia not dominant, it was in fact dominated by others.”