The prosecutor has given Dr. Slavenko Terzic “homework” he should complete by Thursday. when the cross-examination is to continue: he must study the report of the International Crisis Group on the pan-Albanian movement. The defense expert witness did not agree with the report but admitted that he had not read it 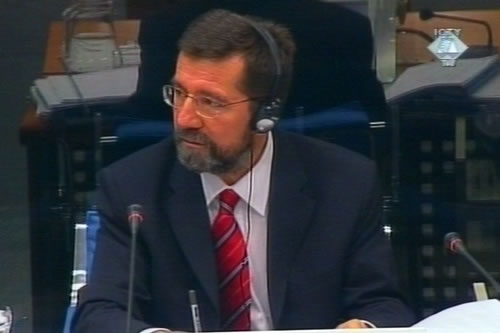 Slavenko Terzic, defense witness for Milosevic
As he concluded his brief course in history at the trial of Slobodan Milosevic, defense expert witness Dr. Slavenko Terzic explained that the main, indeed, the “only integrational factor” in the former Yugoslavia was the State Security Directorate – better known as the infamous UDB-a.

According to Terzic, who is a scientific adviser of the Serbian Academy of Arts and Sciences (SANU) and a former director of its Institute of History, the year 1966 was the “watershed” in which the process of the disintegration of the Yugoslav federation began. In the summer of that year, a top party official in charge of internal affairs Aleksandar Rankovic was removed from office by the decision taken at the Brioni Plenary Session of the Central Committee of the Yugoslav Communist party. After that, as Dr. Terzic testified, “a showdown with the security service followed”. In his opinion, everything went pear-shaped after that and a process began that would culminate with the break-up of the country two and a half decades later.

In the first part of his cross-examination, prosecutor Nice put it to Dr. Terzic that he had relied exclusively on Serbian sources or sources favoring Serbs when he had drafted his report, although it was the duty of expert witnesses to deal with the problem they analyze in an impartial manner. Nice noted, among other things, that in his report and testimony the expert witness had not written or said a single positive word about Albanians, whom he depicted as criminals involved in the trafficking of drugs and people. He spoke about Serbs only as “victims of Albanians”, failing to mention any case or even allowing the possibility that Albanians were the victims of Serbs. At the prosecutor’s insistence, Dr. Terzic did remember that six Albanian civilians had been killed in February 1924 in an operation to arrest an outlaw (“Kacak”). Dr. Terzic claims that all the Albanian victims in the period between 1981 and 1999 - which includes the time relevant for the indictment against Slobodan Milosevic -had been killed in actions against the Yugoslav security forces, therefore as terrorists.

Since in his expert report Dr. Terzic dealt extensively with the pan-Albanian movement, the prosecutor asked him whether he had read an extensive report published in February 2004 by the International Crisis Group. The defense expert witness replied that this was the first time he saw that document, but that he “did not agree with it, since it was the Greater Albania platform.” The response caused some confusion among the judges, who asked the witness how he could not agree with something he had not seen, let alone read. Terzic replied that he “knew the people” who had written the report and that he did not share their views.

According to the prosecutor, Dr. Terzic would have “had to have been aware of the document”, had he done his job as an expert witness properly. Since he had not done so, Geoffrey Nice gave Dr. Slavenko Terzic homework: by Thursday, when the trial is set to continue, he must study the report of the International Crisis Group in order to be able to tell the judges what his points of disagreement with the document were.

Due to the plenary session of the judges, there will be no trials at the ICTY tomorrow.