MILOSEVIC'S ALL OR NOTHING

Although defense counsel Kay states that none of the potential defense witnesses he contacted told him Milosevic suggested they refuse to testify, prosecutor Nice claims "the accused has given them a hint – or perhaps more than a hint – not to come to The Hague." 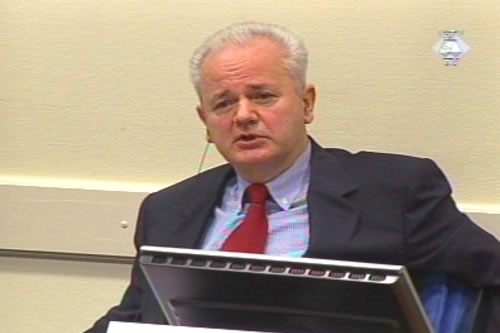 Slobodan Milosevic in the courtroom
If defense witnesses fail to say everything the accused expected them to say when he called them to testify, the blame lies not on the defense counsel or the Trial Chamber, but on the accused himself. So noted Presiding Judge Robinson today in an exchange with Milosevic. He also told the accused that he cannot take two mutually exclusive stands at the same time: first, refusing to take the opportunity offered him to examine witnesses, and then objecting that the court did not hear a complete testimony.

When the accused noted that his assigned defense counsel "does not know anything about Kosovo" and that, consequently, "his examination was deficient for the most part," Judge Robinson responded that the problem could be solved if Milosevic agreed to give instructions to his lawyer and provide him with the necessary information about events. Judge Kwon pointed to another option at the accused’s disposal: issue instructions to the Belgrade lawyers assisting him to come into the courtroom and question defense witnesses.

This exchange between the judges and the accused happened at the status conference held after the testimony of German reporter Hutsch came to an end; the defense had no new witnesses to call. Kay notified the Chamber that in the past few weeks, he had contacted about 150 potential witnesses on Milosevic's list. A large number of them, he said, refused to appear in The Hague because the accused had been assigned counsel. Kay added that many had been surprised to find out that Milosevic intended to call them as witnesses, while some said "they had nothing that might aid the defense." Judge Bonomy noted that this was in fact a "legitimate reason for refusing to testify."

Defense counsel Kay singled out a "representative group" of 20 potential witnesses, most of them officials from the international community or so-called insiders he was trying to bring to The Hague through diplomatic channels with the assistance of the Tribunal Registry. The countries they are nationals of have been asked to ensure their cooperation with the Tribunal; if they fail to do so, judges may issue binding orders for them to testify.

Kay complained about a "campaign" waged against him and "ridiculous and false statements used to justify the refusal to come and testify." It’s gotten to the point where witnesses who agree to come are branded as having "sold out." Kay said that none of the potential witnesses he contacted told him that Milosevic suggested they refuse to testify.

But prosecutor Geoffrey Nice does not share that view. “The accused may not have said that directly, but he gave his witnesses a hint – or perhaps more than a hint – not to come," Nice claims, reminding the court that in September, Milosevic avoided taking a clear stand when judges asked him to urge his witnesses to come to The Hague and testify in his defense.

This time, the judges failed to give their view of the prosecutor's proposal to give the accused yet another opportunity to address his witnesses publicly and call them to come forward and testify. They are obviously waiting for the decision of the Appeals Chamber, which will hold a hearing on Thursday, 21 October.