DEFENSE WITNESS BEFORE A "POLITICAL TRIBUNAL"

Had Milosevic agreed in 1999 to the terms presented him at the Rambouillet talks, "he would be among the victors today, not standing before a political tribunal such as this one," defense witness Liana Kanelli stated today. She is a communist member of the Greek Parliament and Vice-President of the International Committee for the Defense of Slobodan Milosevic. 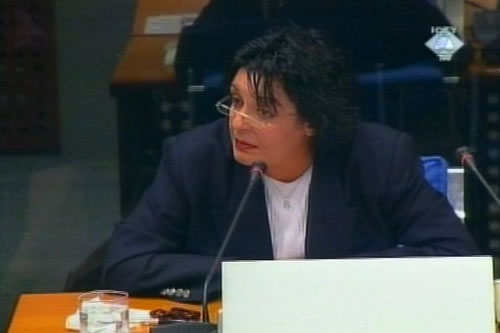 Liana Kanelli, defense witness for Milosevic
Greek journalist Liana Kanelli is one of the few witnesses from Slobodan Milosevic's "priority list" to respond to the summons of assigned defense counsel, Steven Kay. Answering a question posed by Judge Robinson about the relevancy of her testimony, Kay said it is of "limited importance" and admitted that it was not quite clear to him why she was on the "priority list."

Kanelli introduced herself before the Chamber as a communist member of the Greek Parliament; in the course of her testimony, it transpired that she is also Vice-President of the International Committee for the Defense of Slobodan Milosevic. She testified about her visit to Serbia during the NATO air campaign. She first described the aftermath of air strikes she had seen in Aleksinac, noting that only the "homes of the ordinary people" had been hit. She claimed there were no military targets in the vicinity that "a bomb might have missed."

Kanelli does not remember the exact date of her visit to Aleksinac, but she thinks it was around 25 April, one day after the bombing, since the "ground was still warm" from the bombs. During cross-examination, however, it turned out that Aleksinac was bombed on 5 April, three weeks before her visit. Two bombs struck the Deligrad barracks, while one missed the target and struck the town centre, killing 10 and injuring 30 civilians. NATO admitted its mistake and Human Rights Watch published a report about the incident based on an on-site investigation and interviews with eyewitnesses. Kanelli, however, stuck to her original statement, saying she had seen "that an apartment building, not the barracks, had been hit" and that she "trusted her eyes more than any reports by some non-governmental or humanitarian organization or other."

From Aleksinac, Kanelli went to Belgrade, where one night she found herself in a group of four or five foreign journalists received by President Milosevic. Kanelli asked him whether his failure to agree to the Rambouillet accord was the reason for NATO’s air strikes. Milosevic replied, if she remembers correctly, that the air strikes would have been carried out even had he signed the agreement, because "they had decided to do it."

Showing that she did not share the former president’s fatalism, Kanelli added that had Milosevic agreed to Rambouillet’s terms, "he would now be among the victors, not standing before a political tribunal such as this one," which earned her a severe reprimand from Presiding Judge Robinson.

Kanelli apologized to the Chamber, but later on, in response to a question by prosecutor Geoffrey Nice about whether she shared the International Committee for the Defense of Slobodan Milosevic’s views about the Tribunal, she said that it reminded her "of the medieval ages and priests on a witch-hunt."

The judges ignored the comment, and Nice ended his cross-examination by saying, "I do not think I can ask any more questions."

Since the defense had no new witnesses to call, the trial was adjourned until Tuesday, 26 October. In the meantime, the Appeals Chamber will hear Thursday oral arguments on Kay's appeal against the decision assigning counsel to Slobodan Milosevic.