The appeals brief challenging the decision to assign counsel to Slobodan Milosevic is made public today. Witnesses on the accused's list refuse to testify en masse; Kay is considering asking the Chamber to issue subpoenas. 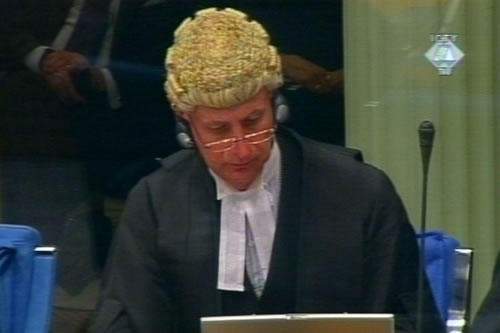 Steven Kay
English lawyer Steven Kay called for an urgent hearing before the Tribunal’s Appeals Chamber in order for Slobodan Milosevic to be given a chance to present his views on the decision of the Trial Chamber to assign him counsel.

In the 45-page appeals brief, made public today at the Tribunal, Steven Kay challenges the decision to assign counsel, noting that the Trial Chamber misinterpreted articles 20 and 21 of the Statute which define the duties of the chamber and the rights of the accused, and that it erred in applying its right of discretion when making its controversial decision.

The Chamber, Kay claims, misapplied the Statute when it concluded that “the ultimate right to a fair trial, which includes the right to defense, may, when appropriate, lead to the assignment of defense counsel to the accused."

In Kay’s opinion, the second error in law is even greater in that "the need to continue and end the trial… has been given greater significance than the need to fully respect the rights of the accused."

If the Appeals Chamber decides that there has been no miscarriage of justice, Kay states as alternative grounds for appeal that the Trial Chamber, in its decision-making process, erroneously availed itself of its discretion. In Kay's opinion, the Chamber first failed to deal with a preliminary matter: is the accused competent to stand trial at all? Second, the Chamber erred when it did not allow the accused to challenge the medical reports stating that he was unable to defend himself by presenting his own medical reports. Third, Kay considers that the Trial Chamber erred in not seeking more recent medical reports on the accused’s health, instead making its decision on reports made some 50 days ago. Furthermore, Milosevic's defense counsel contends that the Chamber could have sought medical opinions on whether the accused could continue to defend himself if the trial were to proceed "in a different work regime," for instance, if the Chamber were to sit every other day. Finally, in Kay's opinion, instead of assigning counsel to him, the Trial Chamber could have assigned stand-by counsel who would help the accused in the presentation of his defense.

Kay also finds fault with the Chamber for not paying due attention to the problems he, as an amicus curiae, noted would occur if the accused--who insists on defending himself and refuses any form of cooperation--were to be assigned counsel.

Steven Kay is asking the Appeals Chamber to allow Milosevic to represent himself or, alternatively, to substitute the assigned counsel with stand-by counsel to assist Milosevic in representing himself.

The prosecution now has two weeks to respond to the appeals brief, which means that the Milosevic trial will continue before the Appeals Chamber has had the opportunity to consider its decision. The trial is set to continue on 12 October, but Kay's brief indicates that the problems leading to the adjournment have not been solved yet. The English lawyer notes that the witnesses on Milosevic's list are refusing to come to testify en masse and that he is now considering whether to apply to the Chamber for the issuing of subpoenas or binding orders to get some of the witnesses to appear before the court.