TESTIMONY ABOUT THE WAR THAT WAS "STAGED" IN KOSOVO

After a four-week break, the trial of Slobodan Milosevic continues with the testimony of a German reporter who covered the war in Kosovo in 1998 and 1999. 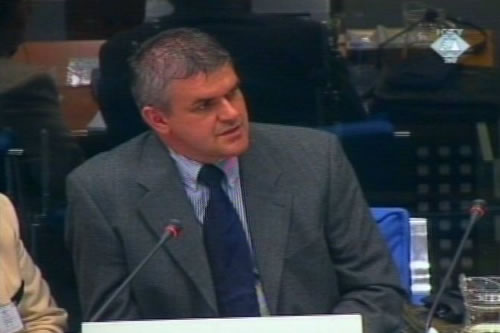 Jozef Hutsch, witness in the Milosevic trial
Unlike Bosnia, where he was as a war correspondent from May 1995 until March 1996, German reporter Franz Josef Hutsch got the impression in Kosovo in 1998 and 1999 that "a lot of things were staged" or "orchestrated" and that the Kosovo Liberation Army had very good “PR advisers."

The German reporter is one of the few witnesses from Milosevic's list contacted by defense counsel Steven Kay during the four-week break who actually agreed to testify before the Tribunal.

Before deciding in 1995 to become a journalist and war correspondent, Hutsch spent 14 years in the German Army, reaching the rank of major by the time he left. As he recounted today, in Kosovo he mostly spent time with Kosovo Liberation Army members, getting to know all of the chief commanders. He testified about the KLA’s organization, structure and weapons and the presence of "foreigners" in its ranks. Among them, Hutsch claims, there were "officers of Arabic origin" and "mujahedin [recruits] from Bosnia" who underwent training in early 1999 in Turkey as air strike spotters for NATO.

The witness described KLA tactics as "throwing stones into water" with the goal of causing concentric waves. As he explained to Judge Robinson when asked to clarify what he meant, "the throwing of stones" consisted of attacks on police or military patrols, the aim being to elicit a harsh response by the Serb security forces. The KLA counted on their response being disproportionate and excessive, and the Serb military and police never failed them.

Hutsch testified that in the course of the Rambouillet talks in February and March 1999, KLA leaders he was in contact with expected NATO to intervene and were stepping up their logistic preparations for war, bringing in supplies of new weapons and military equipment, deploying their forces, and defining their key objectives. Hutsch claims there was even a "priority list of villages to be evacuated" which were in fact evacuated when air strikes began on 24 March 1999. The witness mentioned several Albanian villages in the area between Orahovac and Suva Reka that were evacuated on KLA orders.

However, Hutsch added, there were Albanian villages that were emptied after they were attacked by Serb security forces; according to him, "there was a mixed picture."

Slobodan Milosevic seemed absolutely unconcerned as he followed the testimony of the German journalist. When Judge Robinson asked him at the end of the examination-in-chief whether he wanted to pose some additional questions to the witness, Milosevic refused to, stating that once "his right is restored" he will ask that this witness be recalled so that he can question him.

After that, the cross-examination of the German journalist began. It will continue tomorrow.