Canadian Keith, who spent five weeks as part of the Kosovo Verification Mission in February and March 1999, claims that some OSCE observers were biased and unable to carry out the tasks entrusted to them. Judges reprimand Milosevic for "capricious" behavior. 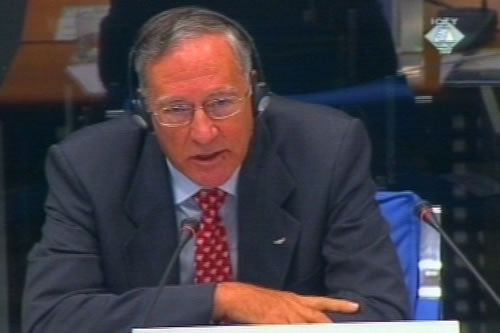 Ronald Keith, defense witness for Milosevic
Five former heads of the OSCE Kosovo Verification Mission, who were there in late 1998 and early 1999, testified during the Kosovo stage of the prosecution case. They described how "verifiers" were prevented from doing their job, which was to determine whether the strength, weapons and activities of the Yugoslav military and police in Kosovo were in keeping with the provisions of the October 1998 Milosevic-Holbrooke agreement.

Milosevic's defense is trying to challenge their testimony by calling Canadian Roland Keith, who was part of the Verification Mission from mid-February to 20 March 1999, first in Glogovac and then in Kosovo Polje. According to his testimony, military and police forces "mostly complied with the agreement," and the VJ and Serbian MUP commanders he was in contact with "were willing to cooperate and replied to all enquiries and requests" made by his verification team. The troops were "mostly in their barracks," he said, while the police carried out "routine patrols" on local roads and particularly on the Pristina-Pec main road. He did not witness any cases where the military or the police maltreated the civilian population, but when he talked with Albanians, they told him there were cases where documents had been seized or persons detained for short periods of time.

In the Albanian villages in the vicinity, Keith described how he would encounter local village guards, composed of five to six KLA members, holding "static points" at village entrances. In the surrounding villages, he said, there was a KLA company, about 35 men strong; they were better armed than the village guards and, according to his estimate, were a "small element of a larger force." When asked by judges if the KLA had a well-developed command structure, the witness confirmed it did, adding that local commanders would respond to his requests only after clearing them with their superiors.

The defense tendered into evidence the witness' notes describing individual incidents that occurred during his stay in Kosovo. These were mostly KLA attacks on police patrols and isolated cases of murder and rape that according to the witness, were mostly "KLA provocations." The number of such attacks increased gradually, and by early March 1999, he testified, they reached the proportions of a "medium-level rebellion." The authorities responded by deploying larger military and police forces with tanks, armored vehicles and artillery support. According to the witness, this was an adequate response by authorities to what amounted to "an armed rebellion."

In cross-examination, prosecutor Geoffrey Nice juxtaposed Keith's testimony with the testimonies of British and Canadian generals who commanded the Verification Mission. Their opinion of Yugoslav and Serbian cooperation and of events on the ground differed from his. The witness, however, stuck to his opinion, saying that some of the Verification Mission members might have been biased and noting that many of them had not been properly trained for their jobs in Kosovo.

The prosecutor, trying to reduce the value of the Canadian captain’s testimony,noted that Keith had "spent only five weeks in a small part of Kosovo," that he did not have access to intelligence available to higher-ranking officers and heads of mission, and that he had not had any contact with the political and military leadership of any of the parties to the conflict.

Milosevic again refused several times the Trial Chamber’s offer to take part in the direct and re-direct examination of the witness, prompting Judge Robinson to term his behavior "capricious" and noting that he expected "more mature conduct" from Milosevic.