In 1991, the SDS sought to find partners to divide up BH because "it was not interested in having a sovereign state of citizens with equal rights," Stjepan Kljuic testified at the trial of the former speaker of the Bosnian Serb Assembly, Momcilo Krajisnik. 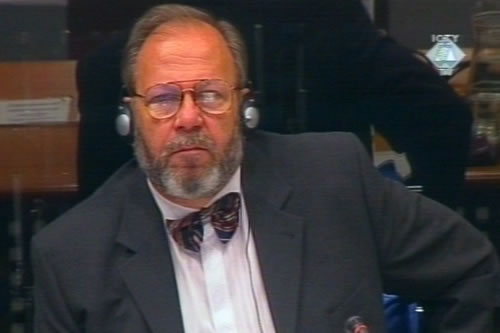 Stjepan Kljujic testifying in the Krajisnik case
The SDS “did not want to have BH as a state" set up in a democratic manner with people with equal rights, and that much was "obvious" as early as 1991, Stjepan Kljuic said on the third day of his testimony at the trial of former prominent SDS leader Momcilo Krajisnik. "That is why they started looking about for partners to divide up BH, first among Bosniaks and then among Croats," the witness added.

Kljuic noted that in 1991, "Karadzic and his cohort started seeking partners for the division of BH."

"The first way was the making of a 'historic deal' with the Bosniak representatives; they tried to do it, however, with politicians such as Zulfikarpasic, who did not have the mandate to represent the Bosniak people. When that attempt fell through, they tried it with me," Kljuic said. He was the leader of the HDZ BiH at the time. "They did not succeed with me either, but they would do it with other Croat representatives. Later on, there were some specific deals made by Boban and Karadzic."

Kljuic also said the SDS never offered to have talks about how BH should be set up, but only issued ultimatums. In a recording of an intercepted telephone conversation from July 1991, tendered into evidence by the prosecution, SDS leader Radovan Karadzic recounts his meeting with Izetbegovic and Zulfikarpasic the day before: "I told them we would set up a parallel state if they fuck with us…. Let there be war and let us finish the job."

In a recording of yet another intercepted conversation, this one from February 1992, Karadzic said, "The optimal solution for us is Greater Serbia; if not, then a federal Yugoslavia; if not – there is no other alternative but this." Invited by the prosecutor to comment, Kljuic said that the third option, the one that Karadzic called "this," was indeed implemented later that year. On the first day of his testimony, Kljuic recounted how Bosnian Serb forces, supported by the JNA and paramilitary formations from Serbia, captured 70 percent of the territory by July 1992 in order to implement their strategic goals already announced – the setting up of "state borders" and joining the other "Serb states."

“They did not win that war," Kljuic concluded. "They could not bring the state of Bosnia and Herzegovina down. It is an institution rooted in the past which has had many difficult moments and has them now, but which will live on."

After the examination-in-chief, conducted by prosecutor Mark Harmon, Krajisnik's defense counsel Nicholas Stewart began his cross-examination. Since Kljuic must return to BH tomorrow, his testimony will continue in November.