THOSE WHO REMAINED “GOT TO BE KILLED”

At the trial of former SDS leader Momcilo Krajisnik, charged with genocide and persecutions in BH, a witness from Kalinovik describes a mass execution of Bosniak prisoners he survived by chance. 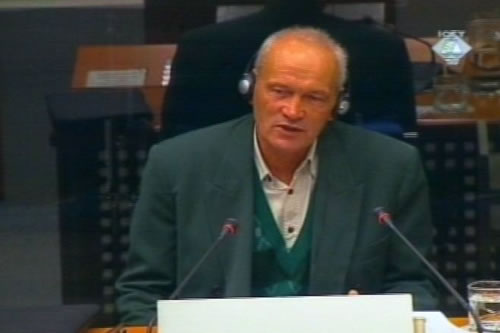 Fejzija Hadzic, witness in the Krajisnik trial
Bosniaks who remained in the municipality of Kalinovik in the summer of 1992 "got to be killed," Fejzija Hadzic testified. He is the only Bosniak to survive the mass execution in Ratine on 5 August 1992. At the trial of former SDS leader Momcilo Krajisnik, charged with genocide and persecutions of non-Serbs in BH, Hadzic described how in the spring of 1992, after the SDS had taken over power in the Kalinovik and Foca areas, life became "impossible" for Bosniaks. Serb authorities prohibited Bosniaks from leaving the municipality without permission; at the same time, the witness stated, they had no livelihood or security in the municipality.

Although, Hadzic noted, "there was no life for Bosniaks there anymore," many feared violating the ban on freedom of movement and did not leave the municipality. In August 1992, 85 Bosniaks were detained in a gunpowder depot near Kalinovik. The witness was among them. "Uniformed persons" led by Pero Elez and Zeko Vukovic put 25 detainees on a convoy and took them to Ratine near Foca. After a soldier announced that "everything" was "ready," detainees were taken off the vehicles in front of a barn.

"They started firing on us in bursts. I was hit in the lower leg and I pretended I was dead," Hadzic recounted. When the shooting stopped, four younger Bosniak men-- separated from the rest of the group before the shooting started—were forced to put the bodies into the barn. Three of them were then killed. The bodies were doused with gasoline and the only surviving detainee was ordered to set them on fire. "He refused and they killed him," Hadzic said, adding that he had been lying under the dead bodies. "The soldiers then set a tire on fire, rolled it into the barn, closed the door and left."

The witness, whose hands were still tied, managed to get out of the barn and hid by a stream. That night he encountered a group of fleeing Bosniaks and crossed over into BH Army-controlled territory with them. Hadzic stated that he did not know if any of the 85 Bosniaks detained in the gunpowder depot were alive today.

Kalinovik is one of the 37 "ethnically cleansed" municipalities in Bosnia and Herzegovina listed in the indictment against Momcilo Krajisnik.