After the Bosnian Serb Assembly made public its "strategic goals," the worst crimes were committed, said witness Stjepan Kljuic at the trial of former speaker of the Assembly, Momcilo Krajisnik. "In a well-prepared military onslaught, Bosnian Serbs captured large parts of the territory…. It was a blitzkrieg against an unarmed population." 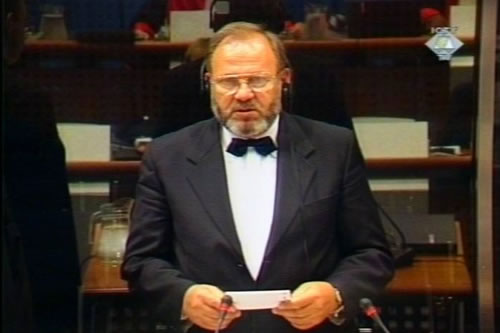 Stjepan Kljuic in the courtroom
In May 1992, the Bosnian Serb Assembly, with the accused Momcilo Krajisnik as its speaker, formally adopted the Bosnian Serbs' "strategic goals." The military operations carried out to implement those goals on the ground, testified Stjepan Kljuic today, "were terrible." He is a former BH Presidency member.

The prosecution is trying to prove that Krajisnik – one of the highest-ranking SDS officials – received information about developments on the ground and that he cannot claim in his defense he was not aware of the crimes. Furthermore, the prosecution notes, Tadeusz Mazowiecki, the UN human rights rapporteur, stated in his October 1992 report to the UN that "ethnic cleansing is not a consequence but the goal of the conflict." To illustrate Krajisnik's views, the prosecutor presented in court Krajisnik’s statement before the Bosnian Serb Assembly in the summer of 1993 that "Muslims and Croats want Banja Luka, but it must remain 'clean.'"

After the Assembly made public its "strategic goals," the first and foremost of which was the "creation of state borders for the separation of the Serb people," the worst crimes were committed, Kljuic says. "In a well-prepared military onslaught, Bosnian Serbs captured large parts of the territory. They held almost 70 percent of BH in June 1992…. It was a blitzkrieg against an unarmed population."

“We fought for a united state of Serbs in BH…. The next stage is its separation and joining the other Serb states," the prosecution quoted an SDS deputy as saying in August 1993 at a session of the Assembly chaired by the accused.

Witness Kljuic added, "The SDS was charged in Bosnia and Herzegovina" with the implementation of "Slobodan Milosevic's overall plan for the creation of a Greater Serbia."

Stjepan Kljuic will continue his testimony on Wednesday, when Krajisnik's defense is expected to start its cross-examination.