At the trial of Momcilo Krajisnik, witness Faik Biscevic said that the SDS leadership in Sanski Most indicated before taking over power in May 1992 that the municipality was to become part of the Serbia state of Western Krajina, whose capital was Banja Luka. He described the preparations for this “project”. 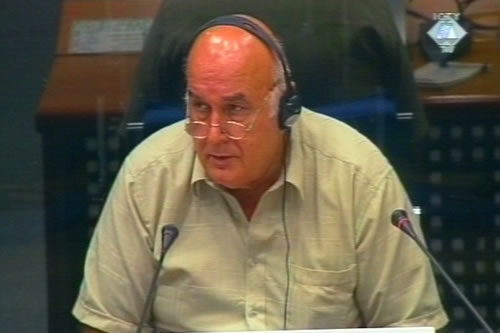 Faik Biscevic, witness in the Krajisnik case
“Today we live because we have to. We are alive, but it's as if we were dead. All we hear is where some new mass grave has been uncovered," said witness Faik Biscevic, a dentist from Sanski Most. Two of his sons disappeared while in Serb detention in the summer of 1992.

Before the war, the witness was an SDA politician in Sanski Most. As he describes, after "the SDS took over power fully" in the spring of 1992, he was detained, severely beaten and after several months of detention in Sanski Most, he ended up in the Manjaca camp, as did his sons. Only one of the three sons survived detention.

At the trial of the former Bosnian Serb leader Momcilo Krajisnik, the prosecution is trying to show that the Serb takeover of power in the municipalities throughout BH and the persecution of the non-Serb population that followed were a part of a pre-planned strategy of the SDS leadership, designed to create a Serb state in BH.

Biscevic said that the SDS leadership in Sanski Most indicated even before taking over power in May 1992 that the municipality was to become part of the Serb state of Western Krajina, whose capital was Banja Luka. He described the preparations for this project. One of the local SDS leaders told Biscevic in that period "that Serbs would rather die than live in Alija's balija state." In April, Biscevic says, a large JNA convoy came from the direction of Jasenovac in Croatia to the Sanski Most area. At the same time, Serbs were being armed and Bosniaks and Croats had their weapons taken away. Nedeljko Rasula, SDS leader in Sanski Most, told Serbs in a nearby village that he could "give them enough arms in two hours to keep them fighting for five years," the witness said. He heard about the statement from a person from that village.

The fact that the SDS was able to take in just two days in April 1992 the buildings of the municipal MUP, the Town Hall, the radio station and the Public Accounting Office indicates that the takeover of power was well-planned. "They immediately took over the propaganda machinery and financial resources," the witness commented.

“The general attack on Sanski Most occurred on 24 and 25 May, there was shooting all over the place," the witness said. Gornja Mahala, the part of the town that did not surrender the weapons was attacked on 26 May. "The troops went from house to house, evicting everyone, those who would not come out were killed," the witness described, adding that 192 houses were set on fire in the neighbourhood. "They were all taken to a training area and from there to prisons or were put on buses and deported."

After being severely beaten in the military base in Magarice, Biscevic was detained in the town together with other prominent Bosniaks from the area. Among them was a Muslim priest who was singled out for particular abuse. His body was found in 1998 near the town.

The defence was not ready to start the cross-examination of the witness. His testimony will thus continue after the two-week break in the trial of Momcilo Krajisnik.