“Serbs were told that the Muslims wanted jihad and would kill them all," witness Izet Redzic stated, describing how the Serb population, including children, was armed months before the actual conflict in Vlasenica. He states that the conflict was organized in accordance with the instructions from the SDS top; the accused Momcilo Krajisnik was a prominent member of the SDS. 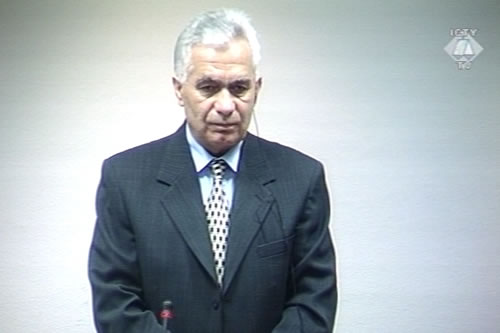 Momcilo Krajisnik in the courtroom
In the period before the conflict in Bosnia broke out, the Serb population in the Vlasenica area was armed, the propaganda that the Bosniaks would kill them was spread, and in mid-1991, paramilitary units, that would later commit crimes against Bosniak civilians, were already deployed, witness Izet Redzic stated. He is a former SDA politician from Vlasenica. These events – according to the witness – were not spontaneous, but the result of the order from "the higher-ups."

At the trial of Momcilo Krajisnik, former SDS leader, accused of the crimes against non-Serb population in BH, Redzic testified that "the SDS had a leading role in the arming of the Serbs," with the assistance of the MUP and JNA. "Serbs were told that the Muslims wanted jihad and that they would kill them all," the witness stated. He said that the commander of the JNA barracks in the nearby Han Pijesak, Colonel Dragomir Milosevic, had told him that "a Muslim could not be given a single rifle, because he would point it at Serbs".

“Even the children, aged 12 or 13 years, that I encountered at a village path, told me that Muslims wanted to kill them and that they had to be armed to the teeth," Redzic recounted. He was the president of the municipal government until April 1992, as a SDA representative.

He states that the presence of paramilitary units in Milici, near Vlasenica, was no secret. "These units were visited by Gracanin, the then Yugoslav Minister of the Interior, the leading SDS(BiH) figures and JNA commanders," Redzic said. He adds that those units were responsible for all the murders, rapes and expulsions in the spring of 1992.

The witness also stated that the SDS leadership was responsible for the policy of ethnic division, and later on for the establishment of a camp for Bosniaks from the villages around Vlasenica who had not left the Vlasenica area by April 1992. In another case, the former commander of the Susica camp, Dragan Nikolic, pleaded guilty and was sentenced to 23 years in prison.

Redzic did not provide any specific examples to prove that the Susica camp was established on the orders from the SDS top, but he claimed that the president of the municipality, an SDS member, Milenko Stanic, said to him that he "no longer had things under control and had to obey the orders from the top."

Krajisnik's defence counsel Chrissa Loukas noted that in his previous written statements to the Office of the Prosecutor, Redzic had never made any allegations about the role of the SDS top, and added that the witness was testifying about "his beliefs" rather than facts.