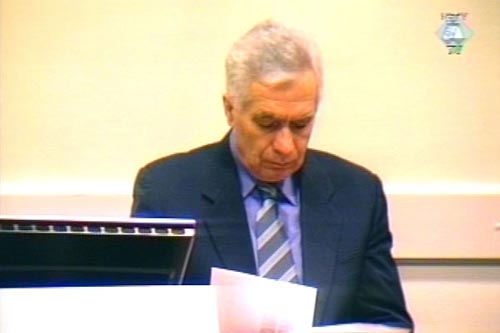 Momcilo Krajisnik in the courtroom
Prosecutors at the trial of Momcilo Krajisnik showed segments from a 30-minute programme produced by the Republika Srpska television in June 1992, after the SDS had "taken over" the power in Kljuc. The segments consisted of interpretations of the events as seen by Jovo Banjac and Vinko Kondic, local SDS leaders.

The video was shown during the testimony of Asim Egrlic, former SDA leader in Kljuc who had shared power there with SDS until May 1992. According to Egrlic's testimony, on 7 May 1992, JNA units and Serb volunteers "occupied Kljuc" without any cause at all. "Brutal deportations", persecutions and mass executions of the Bosniak population began on the very same day. However, in the RTRS program, shown in segments in the courtroom, Kondic and Banjac claimed that the reason for the "complex situation in the municipality" was a "Muslim armed rebellion." I n Kondic's words, ambushes and raids conducted by extremists had "given the Serb army the right to deal with them energetically." According to Banjac, the extremists were responsible for the fact that "life must be divided totally along ethnic lines and ethnically cleansed from all those who do not want to live together in these areas."

The program was made while the witness Egrlic was detained in the Manjaca camp. He had been deported there on 28 May. The prosecution elected to show, as a curiosity, a segment in which doctor Emir Kapetanovic says that he "lives normally" in Kljuc and that abuse and persecution of Bosniaks are just "rumors". A few days after the statement, the witness saw Dr Kapetanovic in Manjaca, severely beaten. He remained there until the fall, when he was released following an intervention on his behalf by the Doctors Without Borders.

Commenting on the statements made by his erstwhile colleagues in the local authorities, Egrlic said that Bosniaks did not have any armed units except the so-called "village guards." One such guard captured five JNA soldiers on 27 May, when they entered the village of Gornji Ramici, releasing them the same day. The Serb forces used this as a pretext for reprisals against Bosniak civilians in the entire Kljuc region.

As he commented the statement made by Vinko Kondic that the mosque in Velagici was destroyed because it was an "extremist stronghold", the witness said that all 17 mosques in the municipality had been razed to the ground; so had the only Catholic church. Commenting on what Jovo Banjac said about the inevitability of "ethnic division", Egrlic said that the consequence was "17,000 Bosniaks expelled " from the Kljuc municipality in 1992. Thousands were killed. The witness personally attended the exhumation of 180 bodies from the Janjiste cave, 130 from the mass grave in Babina Dolina, 45 in Prhovo, 30 in Crvena zemlja…

Before the beginning of the cross-examination, the accused Krajisnik addressed the Trial Chamber. "This Tribunal is my chance to establish the truth," he said, adding that often, "we have three truths here: one truth as told by Serb witnesses, one as told by Muslims, and the third truth may be in the middle. Everyone sees the truth in their way." Krajisnik appealed to the Chamber to facilitate the establishment of the "whole truth."

Presiding Judge Alphons Orie replied that when it comes to truth, "there is nothing in between". "This Trial Chamber is not trying to find a truth, but the truth," Orie concluded.