WHY WAS GENERAL KADIJEVIC ANGRY AT ADMIRAL JOKIC

The witness who was eavesdropping on a telephone conversation between General Veljko Kadijevic and Admiral Jokic in December 1991, claims that the Chief of General Staff was scolding the commander of the 9th Naval Sector for "carrying our small tactical actions" around Dubrovnik, while the JNA top was "trying to topple Tudjman" 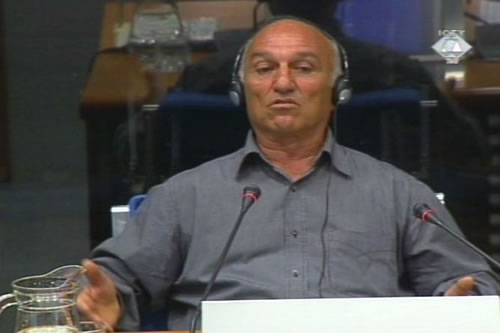 Petre Handzijev, witness in the Strugar case
“As far as I am concerned, Strugar is a noble knight and the people of Dubrovnik should erect a monument to him in Stradun for keeping Dubrovnik whole."

This is what retired captain Petre Handzijev stated today at the trial of General Pavle Strugar, accused of the shelling of the Old Town of Dubrovnik in December 1991. At the time of the Dubrovnik operation, Handzijev was the head of the JNA Operations Centre of the peace-time command in Kumbor, and his task was to facilitate communications between the 9th Naval Sector command and the General Staff in Belgrade.

General Strugar's defense called him to testify about a telephone conversation between the Chief of General Staff, Veljko Kadijevic and Admiral Miodrag Jokic, the then 9th Naval Sector commander. The defense wants to challenge parts of Jokic's testimony, in which the admiral stated that on 6 December 1991 he had been refusing to accept any calls, trying to stop the attack on Dubrovnik. Jokic pleaded quilty and later testified for the prosecution at Strugar trial.

Handzijev presents a different version of events. According to him, General Kadijevic called Admiral Jokic that day, asking him angrily what was happening around Dubrovnik, and the admiral was trying to calm the general down, telling him that this was just "a correction of the combat position of the 9th Naval Sector". Kadijevic replied, according to Handzijev, "Here we are trying to topple Tudjman, and you are carrying out small tactical actions."

Prosecutor Susan Somers tried to impeach the moral standing of Captain Handzijev in her cross-examination, accusing him of having violated the duty to maintain the confidentiality of the communications between superior officers. At her insistence, the witness admitted that he had eavesdropped on the conversation even though this was not a "moral, officer-like or human" act, but that he "simply could not resist" because he had the Chief of General Staff on the line and he had a personal interest in the affair.

Somers insisted that there was not conversation between General Kadijevic and Admiral Jokic that morning, but the witness stood by his version, noting that he had not come to the Tribunal "to defend Strugar or to attack Jokic", but to make it possible for everyone to "grasp some kind of truth" since, as he said, "the truth is imposable to catch and has two tails".