THE GENERAL DID NOT KNOW THE ADMIRAL WAS NEGOTIATING PEACE

General Pavle Strugar's defense is trying to prove that the accused, as commander of the 2nd Operational Group engaged in the JNA Dubrovnik operation, did not know that on 5 December 1991, Admiral Miodrag Jokic agreed to a ceasefire with representatives of Croatian authorities that was supposed to enter into force on 6 December, the start of a fierce artillery attack on Dubrovnik and its Old Town. 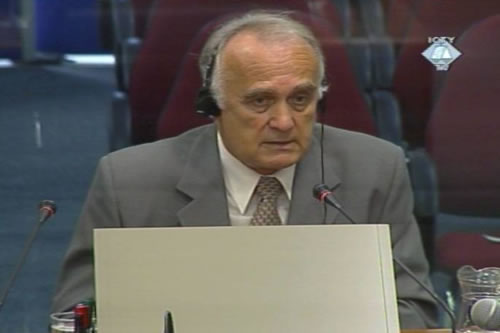 Radoslav Svicevic, witness in the Strugar case
On 5 December 1991, the command of the 2nd Operational Group involved in the JNA Dubrovnik Operation was not aware of cease-fire negotiations conducted by Admiral Miodrag Jokic with representatives of Croatian authorities and in the presence of international observers. This is according to the testimony of retired colonel Dr. Radoslav Svicevic during his cross-examination at General Pavle Strugar’s trial. He was a liasion officer in the JNA 2nd Operational Group command between October and December 1991 during the Dubrovnik operation.

“Do you mean to tell us that on 5 December you were not aware of a cease-fire agreement that was supposed to enter into force the next day?" prosecutor Susan Somers asked.

"I state with full responsibility that I was not aware of it," Svicevic replied. He also claims that the cease-fire talks were not mentioned at all at the regular meeting of the 2nd Operational Group command that day. When asked by the prosecutor whether General Strugar had perhaps informed them at the meeting that a cease-fire should enter into force the next day, Svicevic replied that the negotiations had "reached a stale-mate at that point," and that there was no mention of "any cease-fire entering into force."

Several participants in the negotiations at Cavtat on 5 December 1991 testified about them at this trial – from the Croatian minister of foreign affairs at the time and the mayor of Dubrovnik to international observers and Admiral Miodrag Jokic, who was the official JNA representative at the negotiations. He pleaded guilty for the shelling of Dubrovnik and has been sentenced to seven years in prison.

The prosecutor tried to check once again the witness’ claims that the 2nd Operational Group command was not aware of the cease-fire negotiations, asking him whether this was reflected in the minutes from the command meeting on 5 December 1991. Svicevic confirmed the minutes existed, but stressed that any discussion of a cease-fire would "be written down in his notes." But the topic, he insisted, "simply was not mentioned at all."

The prosecutor, however, questioned the notes made by Dr. Svicevic because the defense presented only photocopies of them and a transcription made, as the doctor said, "before arriving in The Hague, to render the contents more legible." After comparing the photocopies with the transcription, prosecutor Somers showed the Chamber and the witness some examples of inconsistencies she found. "I put it to you that the format of these notes makes them look as if they were made and created precisely for this purpose," the prosecutor said.

Dr. Svicevic stuck by his claim that the content of the transcription was completely authentic. He did admit, during re-direct, that he "failed to transcribe a paragraph." In the debate over the admission of Dr. Svicevic's notes into evidence at the end of his testimony, judges concluded that they would be in a position to make a final decision only after they received the originals from Belgrade. The witness is to appear in the courtroom again next Monday.