In cross-examination of Ambassador Herbert Okun, Momcilo Krajisnik's defense tries to prove that Bosnian Serb war objectives were "reasonable and natural" and that one "could not find any fault with them." 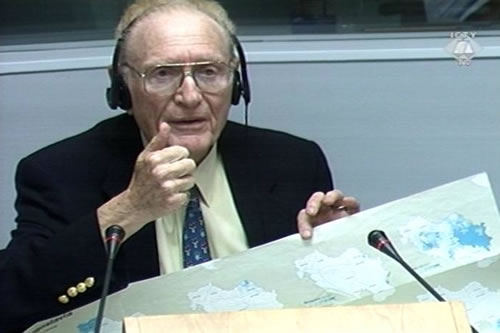 Herbert Ocun, witness at Krajisnik trial
"Bosnian Serb leaders had six war objectives and they openly presented them to the public and international mediators," said Ambassador Herbert Okun, testifying at the trial of Momcilo Krajisnik. During some 50 meetings that Cyrus Vance, David Owen and the witness (as the note-keeping, close associate of the two) held in 1992 and 1993with Karadzic, Krajisnik, Koljevic and other SDS and RS leaders, these were the objectives they insisted be included in the peace agreement for Bosnia and Herzegovina.

The first objective was a separate Serb state in BH, followed by: continuous territory for the state, an ethnically pure Serb state, special relations with Serbia, the division of Sarajevo and the right to veto the BH central government’s decisions.

"We all considered that to be an unreasonable objective," the witness replied, noting that on an abstract level such an aspiration may be "understandable," but if you "connect it with reality," then an ethnically pure Serb state could be created only through violence, persecution and the killing of other ethnic groups.

According to Krajisnik's defense, not even the division of Sarajevo "is a war objective that we could find fault with." Okun, however, begged to differ here, too. "The population of Sarajevo was bound together with the strongest ties, the citizens did not want to live apart, and therefore the only way you could divide them was by force," he said, adding that the city "should have been left in peace."

"We saw no reason to change anything in the city like that, just as we would have found no reason to reorganize The Hague," Okun said.

Stewart, however, would not relinquish his thesis that "no fault could be found" with the Bosnian Serb leadership’s war objectives "in themselves." Not even the sixth one – the right to veto decisions made by the BH central government – "is not an unnatural objective," according to Stewart.

"Mr. Stewart, I must say, if the first objective is not valid, then everything else can be achieved only through force and violence," Okun replied, drawing a parallel in history. "If you agree with the Nazis that Germany should be cleansed of Jews, then it follows naturally from there that they should be taken to Poland and gassed there. I therefore cannot agree with your conclusion that this is a natural sequence of things, because the end result is eminently unnatural," the witness said, stressing that the sixth war objective – veto – would have resulted in the "non-functioning of the Bosnian republic and its de facto dissolution."

"If you describe this as a natural sequence, it might function that way in terms of grammar, but in reality, it entails the physical destruction of the state. And all these objectives were directed precisely towards that goal," Ambassador Okun concluded.