"EVERYTHING NORMAL IN BRATUNAC"

At the trial of Vidoje Blagojevic, defense witness Ljubomir Beatovic claims that "nothing special" happened in Bratunac before Srebrenica fell on 11 July or after. "Only 13 July was a bit tiring" 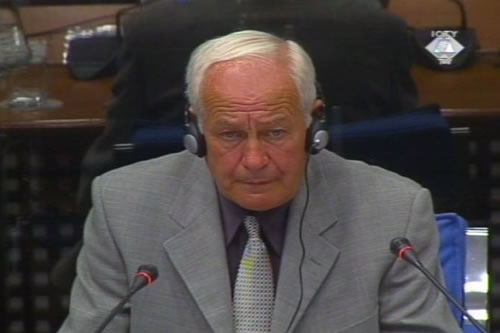 Ljubomir Beatovic, witness at the Blagojevic and Jokic trial
Over the past three weeks at the second Srebrenica trial, one after another former commanders of various units in the Bratunac Brigade were called to the witness stand. The crimes that their commander Vidoje Blagojevic is charged with occurred in the brigade’s area of responsibility in July 1995.

The defense questioned each of the witnesses in great detail about where they and their soldiers were between 6 July, when the VRS launched its attack, and 11 July, when Srebrenica fell. They were also questioned about what they did after that, when Bosniaks from the enclave were deported and killed.

Today's witness, Ljubomir Beatovic, was the medical officer in the Bratunac Brigade. He claims that in those days, "everything appeared normal in Bratunac." No wounded troops were brought in from the lines held by the brigade. For the defense, this is indirect proof that units of the Bratunac Brigade did not take part in the "active attack on Srebrenica": had they taken part, there would have to have been casualties.

According to witness Beatovic, "nothing special was happening" before 11 July or after in Bratunac. "Only 13 July was a bit tiring," he said, explaining that Commander Vidoje Blagojevic ordered him to go to the Vuk Karadzic School and see if the Muslims "who were there" needed any medical assistance. In front of the entrance to the school, the witness encountered three military police officers and two soldiers of the Bratunac Brigade. In the gym, he testified, there were "about a hundred people, sitting with their heads bowed, silent." They did not respond when he asked them aloud if they needed any medical assistance, and he left.

During cross-examination, prosecutor Antoinette Issa asked if the witness "saw any bodies" on that occasion. "I saw living people, not bodies," he replied, adding, "I don't know what bodies you are talking about."

The indictment alleges that between 12 and 14 July 1995, 50 Bosniaks were killed in the gym and the hangar behind the school, and that at least as many others were taken to unknown locations to be killed. Several witnesses, both prosecution and defense, confirmed that there were dead bodies around the school during those days.