THE DEFENCE VERSION OF THE KRAVICA MASSACRE

At the trial of the former commanders of the VRS Bratunac and Zvornik brigades, accused of the Srebrenica massacre, the defense presented its version of events in the co-op warehouse in the village of Kravica on 13 July 1995. 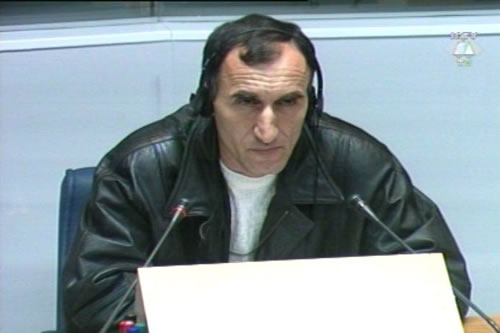 Milos Strupar, witness at the Vidoje Blagojevic and Dragan Jokic trial
Two Bosniak survivors testified at the trial of Vidoje Blagojevic and Dragan Jokic about the massacre perpetrated on 13 July 1995 in the co-op warehouse in the village of Kravica near Bratunac. They were both in the column trying to reach Tuzla after the fall of Srebrenica. After the column was surrounded and shelled, they surrendered to Serb forces on a meadow near the village of Sandici. From there, they were taken to the warehouse in Kravica, where more than a thousand prisoners were crammed in on the afternoon of 13 July 1995.

According to the testimony of these two prosecution witnesses, in the early evening of that day, automatic weapons and machine guns suddenly fired on them from the warehouse doorway. Hand grenades were lobbed in through the open windows. The shooting lasted until the following morning, with breaks. It is alleged in the indictment that between 1,000 and 1,500 people were killed in the massacre.

The defense challenged the prosecution version of events in Kravica by presenting its own. Testifying for the defense, Milos Stupar claims that on 13 July 1995, he was returning from his vacation in Serbia when he encountered members of the 2nd Detachment of the Special Police from Sehovici. He was the commander of that unit until the end of June that year. As he spoke to them, two of the police officers from Sehovici – "Oficir" and Krle – headed towards Kravica to see what was happening. Stupar testified that soon after, intense gunfire was heard from the direction of Kravica. "Oficir" reached him on the Motorola walkie-talkie to tell him that Krle had been killed and he was wounded and asked the witness to take him to the hospital.

Stupar immediately set off for Kravica and picked up "Oficir," who was waiting for him by the road in front of the warehouse; he then told the witness what happened. According to his tale, Krle entered the hangar looking for a man he knew, but the prisoners jumped him, seized his automatic rifle and killed him. "Oficir" tried to pull out his dead colleague, but the prisoners aimed the gun at him and opened fire. He managed to grab the barrel and turn it away from himself, but the barrel was so hot that he was badly burned. The soldiers intervened and events took their course.

Stupar claims that he did not see any soldiers or the bodies of those killed as he passed through Kravica. Only a year or two later did he hear that many people had been killed in the warehouse.

Milos Stupar is known to the Office of the Prosecutor. Its investigators interviewed him two years ago as a suspect implicated in crimes committed after the fall of Srebrenica. Since the witness claimed that he relinquished command of the 2nd Detachment of the Special Police (which was involved in the Srebrenica operation) on 15 June 1995, the prosecutor showed him documents he signed as the commander a month later (i.e., on 15 July) and also his "Personnel Questionnaire," which states he held the post of commander until 22 August 1995. Stupar explained it away as "administration not being up to date" and claims he was "the commander only on paper," not in the field, particularly not in the course of the Srebrenica operation, when he was on vacation. The witness agreed with the prosecutor that the "Trial Chamber would find it useful" to have a piece of paper confirming that he indeed was on vacation during that period. But he claimed that annual leave slips were not issued at the time.

The defense objected to this line of questioning, claiming that it constituted a "veiled threat to the witness," but the prosecutor contended that wasn’t his intention.